Where do leaves go after they fall from the trees? 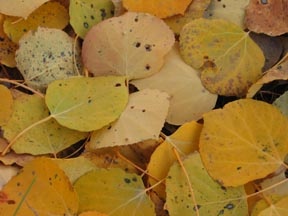 Fall is both one of my most and least favorite times of year. I really enjoy early fall when the weather is warm and the hillsides are covered with a rainbow of yellow, red, green, and orange leaves while the aspen trees and other plants are preparing for winter. I do not particularly like the part of fall that follows, when all the leaves have fallen from the trees. The hillsides are generally brown and I begin to impatiently wait for the snow to come. However, for the forest this is an important time of year for reusing and recycling.

In the Eagle River watershed, aspen trees are the only deciduous or annual leaf-dropping trees we see on the hillsides. In one acre of an aspen forest the trees can produce over one ton of dry foliage every year. Yet, when we visit these areas we are not required to wade, knee deep in the old accumulated aspen leaves. Where do the leaves go?

When I teach students and visitors about decomposition, we study nature’s FBI – fungus, bacteria, and invertebrates. These tiny and often overlooked creatures are busy at work in late fall and fill a niche on which all other living things depend. As decomposers, the many species of fungus, bacteria, and invertebrates actively break down dead plant and animal matter, returning nutrients to the soil.

Animals without backbones are called invertebrates and include worms, insects, and millipedes. These critters tend to be some of the first to feast on leaves after they have fallen to the ground. They start decomposition by breaking leaves into smaller pieces and consuming much of the biomass. However, their waste must be decomposed again by other members of the FBI before the process is complete.

Bacteria’s role takes place on a microscopic level as they work to help break down individual cells. Different kinds of bacteria are also found in the digestive systems of the invertebrate decomposers and help their bodies to break down the leaves.

Mushrooms, a type of fungus, do the majority of the work in the decomposition process. The mushrooms found above ground are only the small reproductive part of the fungus organism. Underground a mushroom is a wide-spread maze of root-like hyphae and mycelium. The hyphae are the part of the mushroom that actually digests the leaf matter in decomposition. The hyphae secrete an enzyme that breaks down the cell walls within the leaves in order to absorb the nutrients.

Once the fungi complete the initial decomposition of the leaves, the smaller invertebrates like arthropods and worms eat the leaf pieces into tiny particles. They also eat waste from other FBI species and return more nutrients to the soil. The whole decomposition process can take many years, and at any one time, leaves at different stages of decomposition are found within the soil.

In different forest communities and regions of the world, decomposition takes place at various speeds. Environmental factors such as temperature, moisture levels, soil acidity, and plant type influence how quickly decomposers can do their work. Decomposition occurs much slower in areas with especially dry or wet soils because these habitats are difficult for bacteria and fungi to survive. In general, broad aspen leaves break down faster than needles from fir, spruce, and pine trees.

Without the FBI’s hard work in the late fall, I would not be able to enjoy the green grasses and healthy wildflowers found in aspen forests in spring and summer. The aspen tree leaves and decomposers that recycle them help to make the forests healthier for all who live there.

Lara Carlson is the Senior Programs Director at Walking Mountains. She originally published this article in 2011. Lara can often be seen with her dog at her side exploring the mountains and watching the changing seasons.