Will Winter Continue this Groundhog Day? 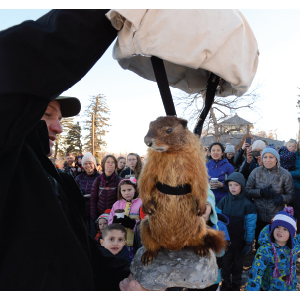 “Okay, campers, rise and shine, and don't forget your booties 'cause it's cooooold out there today.” While we may not be experiencing the crowds of Gobbler’s Knob, PA out here in Eagle County today, one thing is for certain: it is Groundhog Day. For most people, this holiday is a rather silly one, centered around the ceremonious act of pulling a creature from their burrow to look for its shadow… as if getting out of bed wasn’t bad enough. But somewhere beneath the local rocky landscape here lies a similar species, the Yellow-bellied Marmot, native to Colorado and related to the typical groundhog celebrated every February in Pennsylvania.

These rather large rodents spend over half of their life hibernating. In late September when they rest their heads for the ultimate nap, their internal body temperature will fall, their heart rate slows, and their breathing decreases; all as a means to conserve their energy during this time of rest and relaxation. Once February rolls around, so do the marmots, as they may rouse from their slumber to check on the state of their surroundings, and maybe take a quick bathroom break. They’ll continue to rest until the end of April, when they then determine that warmer weather may soon be on the horizon.

But where did this tradition of Groundhog Day begin? There is quite a bit of history to our friend the groundhog: more than you may think. It can be said that Groundhog Day has roots from the European “Candlemas Day”, where English folk songs sang “if Candlemas be fair and bright, come, Winter, have another flight; if Candlemas brings clouds and rain, go Winter, and come not again.” As this tradition was passed west to Germany, an animal was first introduced in the shape of a hedgehog. In this case, if the infamous German hedgehog saw its shadow, there would be six more weeks of winter. Later on when German settlers found themselves coming to the shores of America, so too did their rather obscure traditions. While a hedgehog could not commonly be found in the grasslands of Pennsylvania, a groundhog would just have to do. Meet Phil, the charismatic creature who would soon become a national celebrity. Colorado, however, would surely not be a place to miss out on the fun. And if you’re wondering just what the Centennial state would call their local “groundhog ambassador”: Meet Flatiron Freddy. Boulder’s very own yellow-bellied marmot, who makes a special appearance every February by way of truck, skis, or even parachute. (Pictured)

While naturalists all around can share a smirk over the somewhat ridiculous nature of the holiday, it can just as well serve as a reminder in celebrating the sheer excitement over a notable species and the prosperity of our scientific community.

So, as legend has it, if Punxsutawney Phil does in fact see his shadow, his fear will send him running back into his burrow and six more weeks of winter will follow. What are you hoping for? “Okay, campers, rise and shine, and don't forget your booties 'cause it's cooooold out there today.”

Bridget White is a Naturalist at Walking Mountains Science Center. Join her on a free snowshoe at the Vail Nature Discovery Center in Vail!