Romance in the Rut: Moose Mating Season is Finally Here! 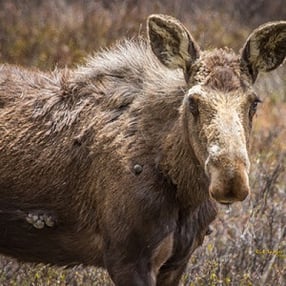 While weather in the mountains is getting cooler, things are heating up for the giants of the deer family: moose. In September and October, a bull moose’s bellows can be heard for miles as they search feverishly for mates. Fall is a crucial time for these resident animals. If adults don’t mate early enough, their offspring may be born too late in the spring, and be unfit to survive come the following winter. In fact, mating is so important that Bull Moose stop eating for weeks during the rut. Instead, they focus all their time and energy into finding a partner. It’s easy to admire their dedication to dating, but how do they actually go about finding a mate?

Male Bull Moose have one obvious way they show off to the ladies: their antlers. The bigger the rack, the fitter the bull, and the more females are likely to be interested. It turns out size does matter to a female moose, because a large set of antlers indicates that a bull is healthy and would likely father strong calves. Due to their size and weight, antlers grow solely for mating purposes, then fall off in the winter. Male moose begin growing antlers after their first year, but are very unlikely to find a mate at this young age. Cow moose tend to prefer more mature bulls, and a bull moose’s prime age for mating is between five and ten years.

During the rut it is not uncommon to see clashing antlers and bold stand-offs as bull moose compete for mates. Although these displays are intimidating, sparring is a good way for moose to assess their strength compared to other bulls and avoid more serious fights. Early in the mating season these scuffles are similar to wrestling matches where neither party is likely to be hurt. Later on, it is more common for severe fights to occur. When push comes to shove, most moose will avoid serious injury and back down from a sparring match when their opponent is clearly stronger.

Beyond majestic antlers, fierce sparring and haunting bellows, bull moose have another unusual technique to attract females. Though pungent and unappealing to people, bull moose urine is a powerful aphrodisiac to cows. Male moose use their antlers to dig pits in the mud called wallows. They fill these mud pits with their own urine and rub the muddy mixture on themselves as a sort of stinky cologne. The wallow’s scent signals to any females in the area that a nearby male is single and ready to mingle. The scent of a wallow is so appealing that cows have even been known to fight each other over rights to a wallow.

Rutting is an incredible spectacle to observe, and the best time to see moose mating behavior is at dawn or dusk in marshy areas. Piney Lake is known as a moose hotspot around the Eagle Valley because of its plentiful woody material. Moose can also sometimes be seen in riparian areas near Minturn on trails including Grouse Lake and Cross Creek Trail. If you are lucky enough to hear the bellow of a bull or witness sparring, it is wise to observe from a distance. Give the moose plenty of space and privacy to do their business, and avoid disturbing an angry bull moose on a mission for a mate.

Rachel Dorencz is a community programs coordinator at Walking Mountains Science Center. This fall you can catch her enjoying the cooler weather and hoping to catch a glimpse of wildlife.

In the Company of Moose by: Victor Van Ballenberghe