Where Do Fish Go When Their Home Freezes Over? 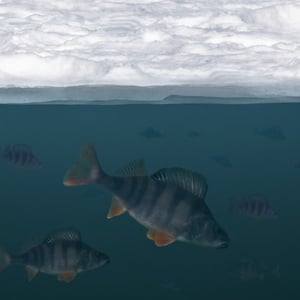 With winter in full swing, many of the lakes and rivers have frozen over. But don’t let their calm appearance fool you, below the surface they are still teeming with life. Fish that have spent their summers swimming around and feeding, now are trapped underneath a frozen ceiling. Winter presents new challenges to the fish that call Eagle Valley their home. Temperatures drop, food is scarce and oxygen levels recede. But the fish here have adapted to live here year-round.

Like many animals that migrate, some fish may swim down river to warmer areas. If this isn’t possible for them, they will seek out the warmest part of the water, which is often found at the bottom. Warm water is found at the bottom because warm water is dense, causing it to sink below the cooler water. Ice is less dense that than liquid water, which is why you see ice cubes floating on the top of your drink. Once ice has formed over the lake or river it acts as an insulator allowing for the water at the bottom to be 4 degrees warmer that the surface water. The fish will stay in these warmer waters, until summer returns.

As the temperature in the water drops, the body temperature of the fish drops as well. This is because fish are poikilotherms, or cold-blooded. This means that their body temperature resembles the water they live in. With colder waters, fish will slow down their metabolism to conserve energy. They become less active and may even appear sluggish. By limiting their activities, they eliminate the need to hunt and spend energy. While some fish just slow down, others take this to the extreme. They will reduce their heart rate and respiration, and they stop eating. This state is called torpor, similar to hibernation, but unlike hibernation, they can awaken from their slowed state.

A lesser known issue that fish have to deal with is the amount of oxygen in the water drastically drops. This is partly due to the decrease in productivity ­of marine plants and algae. Fish will stay in areas with a steady flow of water, which circulates in more oxygen. They will also slow down their activity levels to reduce their need for oxygen. Conserving energy is the key among all animals that tough out the winters here, and fish are no exception.

While fish may have it hard in the winter, there are still many species that choose to tough it out here in the Eagle Valley. This allows for fly fishing to continue year-round. If you are looking to fly fish in the winter, cast your fly in areas of deeper, unfrozen water. You might find a rainbow trout hidden in the deeps of the river or a brook trout nestled under a log. But beware, these fish as conserving their energy and may not put up the same fight they did in summer.

Don’t let the frozen waters fool you. There is still life hidden beneath the frozen ceiling. And maybe the next time you take a walk along the Eagle River, take a look and maybe you’ll see one of these winter dwellers.

Karen is a naturalist at Walking Mountains Science Center, who enjoys befriending all the creatures that live below the water’s surface.