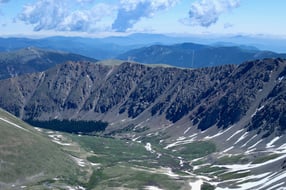 In the early hours of Monday morning local resident Kelly Luebbering spotted a rare sight: a right-sided sidehill wampahoofus scaling the cliffs above Minturn. “I was out for my morning run when I noticed movement above me. When I pulled some collapsible binoculars out from my fanny pack, I knew for sure that’s what I was seeing. Even in the dim light, I could tell that the wampahoofus had longer legs on the right,” Luebbering said.

The wampahoofus is a mammal distantly related to mountain goats with longer legs on one side of its body so that it can walk more easily on steep hillsides. While it appears similar in size and appearance to a mountain goat, it has several feline features if one looks closely. Wampahoofi have large eyes that help them see better at night while browsing high up in the alpine. Their tail is also long to aid in balancing on loose scree slopes, and they have prominent whiskers to sense changes in the atmosphere so that they can better respond to the quicky changing weather.

The two varieties, left-sided and right-sided, are determined genetically, with left-sided being the dominant trait. The left-sided variety must travel in a clockwise motion on hillsides while the right-sided variety travels counter-clockwise. Unless right-sided pups are born to a right-sided parent, they suffer high mortality rates because they are unable to follow their left-sided family when they leave the nest and must fend for themselves at an early age. The sighting of a right-sided adult is thus very special and considered good luck by most.

A sighting this far north in Colorado is also unusual. According to Dr. Hannah Fake, a leading researcher on wampahoofus ecology, “The primary breeding population of the wampahoofus is in the San Juan Mountains of southwestern Colorado because they require remote, unvisited hillsides on which to raise their young. Development within the Eagle Valley spurred an increase in foot and motor traffic near northern breeding populations, with both the additional noise and more frequent encounters with hikers stressing pups during the crucial stages of early development and increasing pup mortality during the first year of life. Because their population was previously decimated from hunting, they quickly became extirpated from the region.”

Wampahoofi are monotremes—meaning they lay eggs—and build their ground nests high in the alpine during spring snowmelt. Encounters with humans are incredibly stressful because of their limited mobility and it is common for them to panic, lose their footing, and fall down the mountainside.

Their antlers, Dr. Fake explained, are unique in their ability to continue growing after animals dropped them in the fall. “If you look closely amongst the rocks in large talus fields, which are their primary breeding grounds, you can still find what appear to be small, twisted bushes that established themselves on the mountainsides. Those are remnants from historic populations. Since wampahoofi never fully remove the velvet around the base of the antler, especially on the downhill side, the antlers are able to grow root systems after being dropped in the fall.”

If you encounter a wampahoofus while out hiking please make sure that, as with all wildlife, you maintain a proper distance from the animal. For wampahoofi and most other wildlife you should stay at least 25 yards away, and for predators you should stay at least 100 yards away. If you are close enough that the animal changes its behavior, then you are too close. Also make sure to properly store all food and pack out any trash. You can come by Walking Mountains Science Center in Avon to see some wampahoofi antlers on display!

AJ Lodge is a winter naturalist with Walking Mountains Science Center. They can be found wandering the trails at all hours of the day watching for signs of spring to slowly emerge.