How Do Bats See with Sound?

Have you ever wondered how bats hunt for prey in the dark? Do you know who is responsible for keeping our insect populations under control in Colorado? Bats have a special superpower that they use every single day!

Brown bats are one of 1,000 bat species that use echolocation to hunt for prey.

Bats do this by sending out a sound wave call, which bounces off of an object, such as a cave wall or a tasty moth, and then echoes back to the bat. Based on this echo, bats can determine an object’s texture, size, distance, speed, and the direction it is moving. Bats use these calls to navigate at night, find food, and communicate with each other. Each species has a unique echolocation call. Mothers and babies also learn their individual sounds to find each other in groups of thousands of bats.

Sound is described in frequency (pitch), intensity (how loud it is), and duration (how long it is). Frequency is the number of times per second that a sound pressure wave repeats itself. Low frequency sounds travel further than high frequency sounds, but high frequency sound gives more detailed echoes, so bats generally use higher frequencies when tracking down food. Most bat calls are around 20-200 kilohertz (kHz) frequency. Humans can only hear a maximum of about 20 kHz, so most bat sounds are ultrasonic, meaning humans cannot hear them. It’s a good thing that humans are not able to hear most bat calls because the sound would damage our ears. Most bat calls are around 50-120 decibels (dB), louder than a smoke detector going off 10 centimeters from your ear. Some species make these calls by contracting their larynx or clicking their tongues. Other bats can make these calls through their nostrils, using special noses that function as megaphones to amplify and direct sound, but look like they smashed their face into a wall. 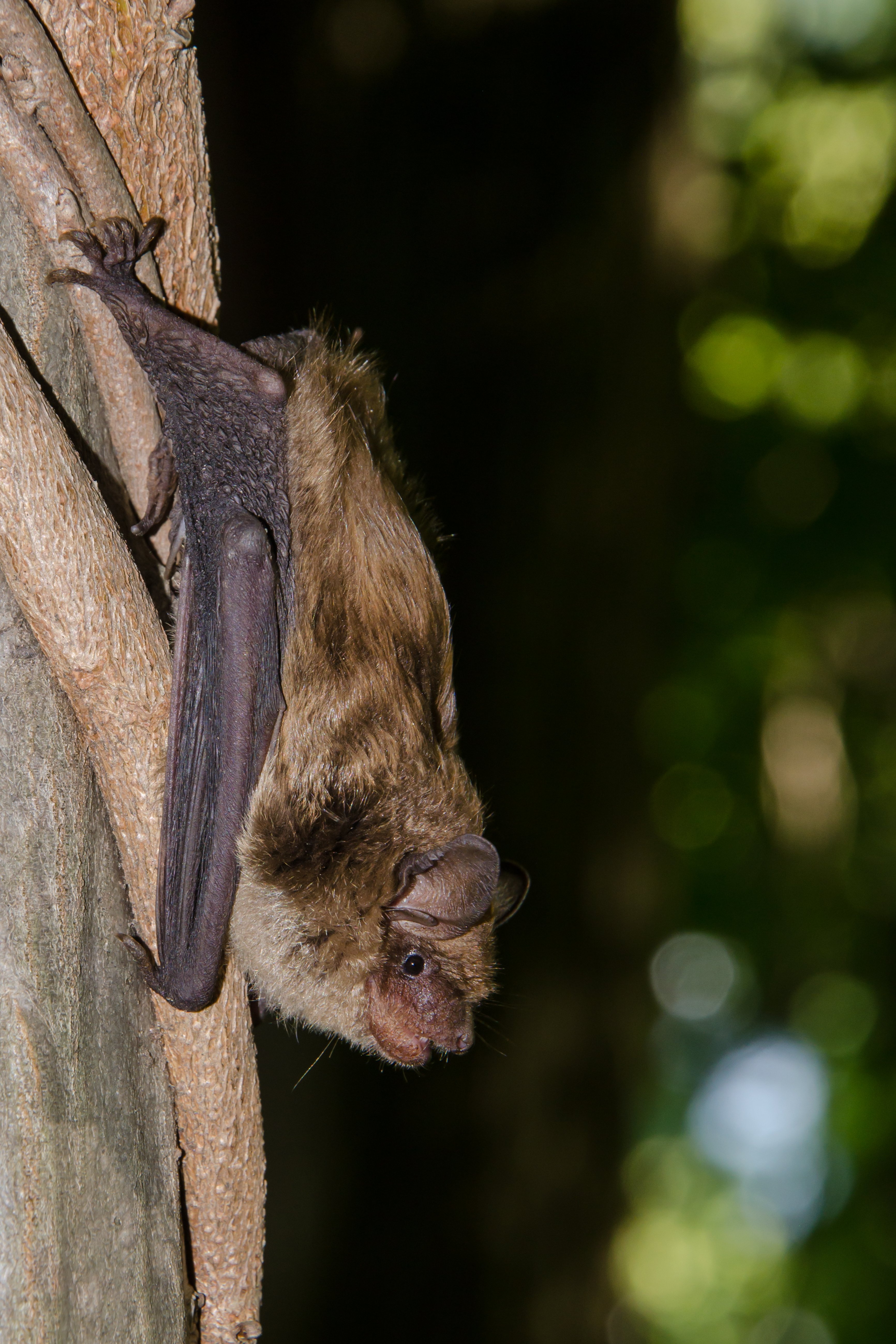 Bats send out a sound wave call, which bounces off of an object, such as a cave wall or a tasty moth, and then echoes back to the bat.

Bats Use Echolocation to Hunt

Echolocation is a critical hunting advantage for insectivorous bats, but some of their prey, such as moths, also have evolved to escape these predators. Some species of moth have special membranes stretched over sensors that act as ears and can detect bat echolocation calls. The greater wax moth is capable of sensing sound frequencies of up to 300 kHz, the highest recorded frequency sensitivity of any animal! This is why bats will often fly in erratic patterns, in order to try to confuse their prey. Many of the bat species in Colorado love eating moths, but they also snack on mosquitoes, beetles, crickets, and many other insects. Bats can eat more than 50% of their body weight in insects every night. Even small bats can catch over 1,000 insects per hour! Bats are a critical part of our ecosystem and they keep pests out of our crops and off of our skin.

Bats are essentially the ultimate neighbor, not only can they fly thousands of feet above ground and catch tailwinds up to 100 miles per hour, but they also eat billions of insects every year using the power of sound! Next time you notice bats flying around at night this summer, take a moment to consider their ultrasonic power and thank them for helping us avoid being covered in mosquito bites.

Carli Escamilla is a Naturalist at Walking Mountains Science Center. She enjoys spending her summer days exploring trails on her bike and her summer nights watching bats take flight.