As the snow falls and the days get shorter, you might find yourself thinking about hot chocolate, candy canes, and mailing out your annual Christmas or New Year’s cards. The first known Christmas card was published in 1843, before the iconography of the holiday was as established as it is today. For many decades thereafter, the scenes and messages of many of these greetings seem rather morbid and bizarre by today’s standards. Images of mutant vegetables, murderous mice, kidnapped children, and general mayhem were more the stuff of nightmares than scenes of peace and joy. 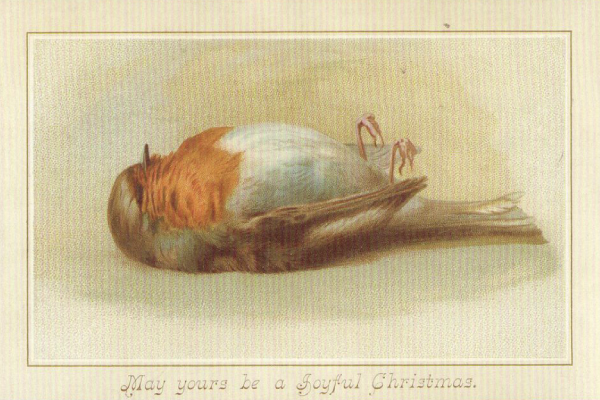 “A jolly Christmas” reads a card depicting well-dressed children who have come across a dripping wet boy who appears to have emerged from an icy pond. “Peace, joy, health, and happiness” reads another card with a dirty mouse riding a lobster like a pony. A child writhes inside of a giant teapot while holding a note that says “a Christmas greeting with love.” Yikes.

During the Victorian era, these greetings, which were expensive to print and mail, were intended as conversation starters and often reflected the dark humor the British are known for. They also reflected misconceptions about nature. For example, Western naturalists such as Pliny the Elder believed that certain animals died in the winter and were resurrected in the spring. How else to explain the disappearance of (hibernating) frogs and (migrating) songbirds? This could explain why so many holiday cards depicted animals dying or murdering each other in anthropomorphic ways such as drowning in alcohol or stabbings. 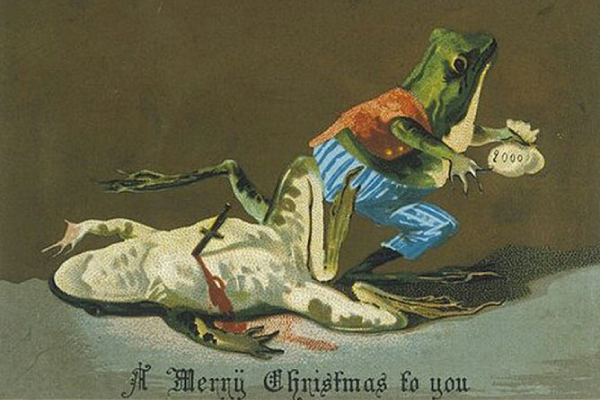 Yet, as a bird lover, it is the trend of dead bird imagery that gets my attention the most. Why would someone want to look at an intricate portrait of a beautiful songbird, toes up on its back? The origins of this are tied to the tradition of Christmas wren hunts, which themselves have their origins in Celtic traditions, where wrens are sacrificed in order to bring in luck for the coming year. This tradition spread throughout North America into the nineteenth century, where holiday “side hunts” had hunters competing for how many birds they could kill in one day.

The late nineteenth century was also the beginning of conservation in the Western world, and people grew concerned about declining bird populations from overhunting for tradition and fashion. An ornithologist and member of the recently-formed Audubon Society, Frank Chapman, proposed that people count birds at Christmas rather than hunt them. The first Christmas Bird Counts were held in 1900, and today it is the longest-running citizen science survey in the world.

The Audubon Christmas Bird Count attracts experienced bird watchers all over the world, and helps others experience the joy of bird watching for the first time. The data collected by volunteer observers is used by researchers, biologists, and wildlife agencies to study the long-term health of bird populations. The data also helps to identify environmental issues and inform strategies to address them. For example, the Audubon Society has used this data to inform its predictions of which species will lose their ranges this century as a result of climate change. Walking Mountains Science Center is hosting the Eagle and Dotsero bird counts on Friday, December 17, and all are welcome to join. 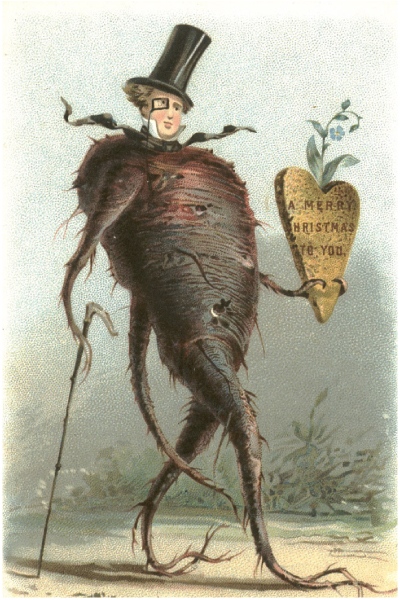 Today, the iconography of Christmas still conjures a lot of Victorian-era imagery, but with happy living creatures and peaceful snowy scenery. Whatever holiday traditions amuse you, we hope you’ll make the Christmas Bird Count one of them.

If you go…
What: 122nd Annual Christmas Bird Count
When: Friday, December 17
Where: Eagle, CO
More information and register: https://www.walkingmountains.org/event/audubons-122nd-annual-

To participate or learn more about the CBC, please visit www.walkingmountains.org/project/christmas-bird-count/.