The Top of Colorado's Aquatic Food Chain is the River Otter! 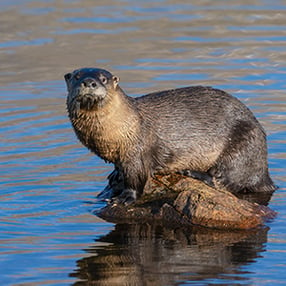 If you’ve seen a slinky-like creature hanging around the water in the winter time, there’s a good chance you’ve seen a river otter! Unlike people, river otters and other semi-aquatic animals don’t have to get out of the water at the end of summer. River otters are very playful and can be seen sliding on the ice and snow in the winter. They live in the Eagle River, but are more often seen in larger waterways, like the Colorado River!
River otters are members of the weasel family and they can be found living in and around
bodies of water, specifically rivers. Animals in the weasel family typically have elongated bodies, short legs, round ears, and long tails. River otters, who have brown, thick fur, a long tail, and short, stubby legs are one of two aquatic carnivores in the weasel family, the other being the mink. Found in the same habitat are beavers, whose abandoned dens are the perfect shelter for river otters to adopt. Work smarter, not harder, right? A river otter’s average lifespan in the wild is 8-9 years and they can be anywhere from 10 to 30 pounds. Their bodies can be almost 3 feet long, but they’re more often around 2 feet long. Their tails can add another foot or two in body length! River otters eat roughly 12-15% of their body weight a day, feeding on small aquatic animals, such as crawfish, frogs, fish, and even smaller mink.

One big challenge for the river otter in the wintertime is staying warm! With water temperatures being near or at freezing, it is difficult for them to maintain heat. One strategy river otters use to stay warm is meticulous grooming. When they groom, they spread a fatty substance called sebum onto their fur, which helps prevent water to skin contact. Sebum comes from their sebaceous gland, a gland attached to their hair follicles. The river otter’s entire body is covered in fur, except for their feet. To keep their feet warm, their bodies use a process called countercurrent heat exchange, where arteries carrying warm blood away from the core warms cold blood veins are carrying towards the core. This process prevents extra heat loss for extremities, like hairless feet!

River otters are very playful, their long bodies allowing them to roll, twist, and turn very easily in the water and they are known for sliding or burrowing in the snow or mud. While they spend a lot of their time alone or with one other otter, they socialize and play in groups. These playful behaviors improve their hunting and scent marking behaviors, as well as strengthen social bonds.

Next time you’re exploring the rivers of Colorado, keep your eyes peeled for river otters! Don’t get too close though, they are top predators in their environment. As always, work to keep the environment clean so river otters and other wildlife have a safe and clean environment to live in.

Caroline McGann is a recent graduate from the University of North Carolina Wilmington and works at Walking Mountains Science Center as a Winter Naturalist.