Did you know Colorado’s State Fossil is the Stegosaurus?

Think of a name of a dinosaur - Go! Some of the most recognizable dinosaurs that come to mind are: the Tyrannosaurus Rex, the Triceratops, a Pterodactyl, an Apatosaurus, or the dinosaur of this article with the large plates and spikes that are along its spine and tail… the Stegosaurus. When we named some of the most recognizable dinosaurs, we can associate them with the main characters in the 1988’s children’s movie, The Land Before Time. In the movie, the character “Spike” was the Stegosaurus, meaning “armored roof lizard.”

Stegosaurus dinosaurs walked on all four of their legs and had a long neck and long tail. They were very large ranging in about 29 feet in length and could weigh up to 5 to 7 tons. Their main focal point and adaptation that clearly identifies them are the large bone plates that stood erect along their spine and tail spikes. Stegosaurus had between 17 and 22 large bone plates that could be up to 24 inches in width and height and at the tip of their tail were four large spikes that could be up to 3 feet long! The spikes are called thagomizers. According to UC Berkeley Researchers in 2005, they theorize that the bizarre bony plates and spikes likely served no function other than to differentiate between species. While in previous years and other researcher beliefs that the plates and spikes were used as a defense mechanism, aid with temperature regulation, or for attraction of a mate in breeding.

The Stegosaurus were plant-eating creatures that roamed many parts of today’s North America during the Mesozoic era of the Late Jurassic period. Fossil records have dated Stegosauraus living in what we know as the state of Colorado more than 150 million years ago. 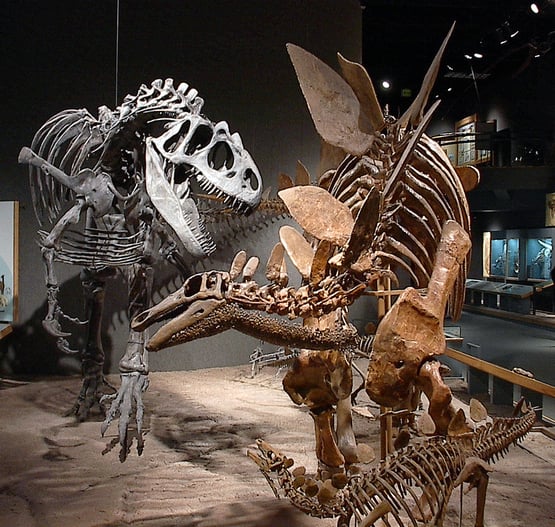 Fossils of a Stegosaurus and its babies being attacked by an Allosaurus at the
Denver Museum of Nature & Science. Photo by Luke Jones.

While the first Stegosaurus (pieces of vertebrae, dermal plates, and other parts) in the world was discovered by Arthur Lakes near Morrison, CO in 1877, the first nearly complete Stegosaurus skeleton was discovered in 1885 in Cañon City, Colorado, by Marshall. P. Felch within the Morrison Formation of bedrock. Felch was not a Paleontologist, but a local farmer whose family purchased the land and surprisingly discovered a leg bone that was one foot in diameter of a very large mystery animal. After stirring up some publicity with the Cañon City Times, Geologist Professor Benjamin Franklin Mudge visited to examine the find and later on brought Othniel Charles Marsh to discuss starting a quarry. 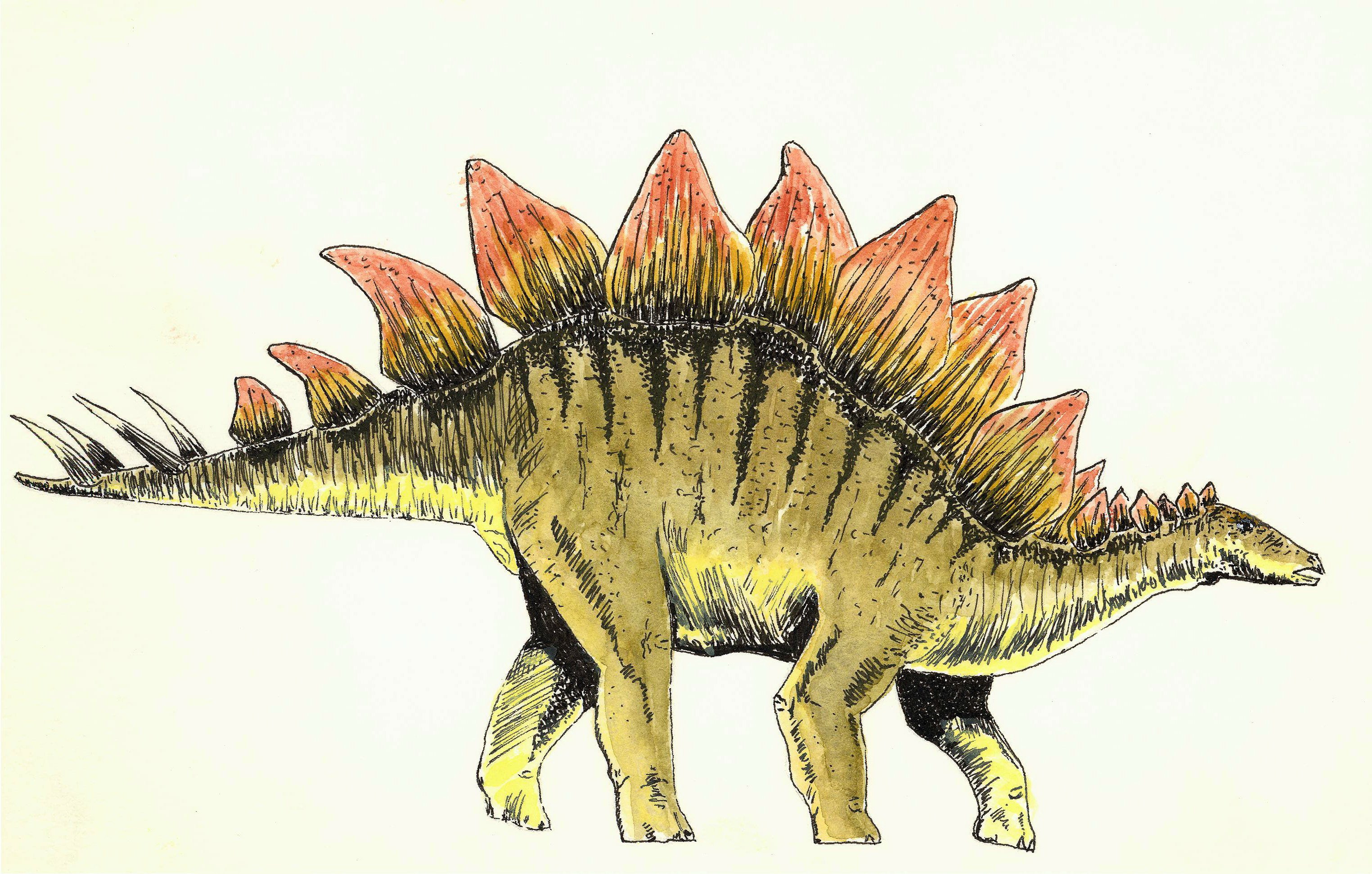 This discovery occurred during the Bones War of 1877, also known as the Great Dinosaur Rush, which was a period of competitive and ruthless fossil hunting and discovery between Othniel Charles Marsh and Edward Drinking Cope. Both were Paleontologists: Cope of Academy of Natural Sciences of Philadelphia and Marsh of Peabody Museum of Natural History of Yale. Their fossil hunting race let to being incredibly intense, ruthless, and a competitive, personal endeavor between these two to ruin each other’s professional reputation. One of Marsh’s successes in the fossil race described and named the Stegosaurus amongst other species of fossils of the Morrison Formation.

Stegosaurus is one of the least common dinosaurs that were found in the Morrison Formation. Remarkably, three species of Stegosaurus have been found and classified there: S. stenops, S. ungulatus and S. sulcatus. Records show that remains of over 80 individual animals of this genus have been found there. There are only six individual skeletons on public display within the United States. One of which can be found at the Denver Museum of Nature & Science.

Since Stegosaurus has had such a history in Colorado, it was designated to be the official state fossil on April 28, 1982 but the Executive Order of Governor Richard D. Lamm. A fourth-grade class had campaigned across the state for two years to highlight the Stegosaurus as a Colorado symbol according to Colorado.gov.

Christina Belardo is the Girls in Science Coordinator at Walking Mountains Science Center. In her free time, she is a scientific illustrator exploring the outdoors through pens and a sketch pad.