Dandelions, Leave Them Be 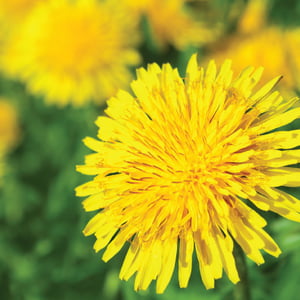 With spring here, let us take a moment to learn about a plant you might not give a second glance. As humans, we may see the bright yellow flowers of the dandelion and consider them a noxious weed. Growing where many can’t, they find cracks in the sidewalk proving notoriously hard to get rid of. While we may try our hardest to eliminate the garden pest, many animals and insects rely on them to survive.

When the days turn longer and the snow starts to melt, dandelions are the first to flower. Capable of growing over a foot tall and having large jagged leaves they become a food source for many insects that are waking up from their winter slumber. Insects such as bees, dragonflies and flies rely on the flowers as an initial food to survive until other plants bloom. Dandelions have one of the longest flowering periods of any plant, feeding many organisms during their life span. Mammals and birds are also seen grazing upon these plants. In the Rocky Mountains, many deer and elk graze upon these plants and if you took a trip to Yellowstone National Park, you may witness a Grizzly bear gorging on their flowers.

Dandelions are widespread because of their seed dispersal mechanism. Each flower can produce 150-200 seeds. Once done blooming they create the iconic white puffball that is filled with seeds. Each seed is attached to a fluffy “parachute” that uses wind to move great distances. The seed can travel hundreds of miles away and as a result of this highly effective dispersal mechanism, dandelions are able to colonize vast stretches of land. Once the seed lands, it starts growing a long root called a taproot. This root can reach depths of up to three feet, allowing it to gather nutrients and water other plants are unable to reach. Once the taproot is established, it can be very hard to remove a dandelion because the plant can regrow even if the flowers and leaves are removed. Dandelions commonly germinate in areas where the ground has been disturbed. Areas such as your lawn or garden are perfect habitats. They may not be your intended plant of choice, but dandelions can have positive impacts on the ecology of the environment. Their roots help to aerate the soil allowing other plants to grow.

While not native to North America, dandelions were brought overseas by early settlers and can now be found in all 50 states.  They originated in Europe and Asia and have been documented being used medicinally. Historically tea brewed from the leaves were used to calm an aching stomach, prevent liver disease and reduce fever. In addition to acting as medicine, dandelions have also been used as a food source. The entire plant is edible, from the taproot to the flower. If you are looking at expanding your palate, try a dandelion salad. If looking to harvest dandelions, look for young plants, which are generally less bitter than older plants. Harvesting anything from nature should only happen if you are 100% confident in the identification of the plant and know the plant has not been exposed to pesticides. Even if you don’t plan on throwing them in your salad, when spring arrives and the dandelions start blooming, consider leaving them alone. You never know who might be relying on them.

Karen Woodworth was a Naturalist at Walking Mountains in 2019 who enjoys prancing around the dandelion fields.