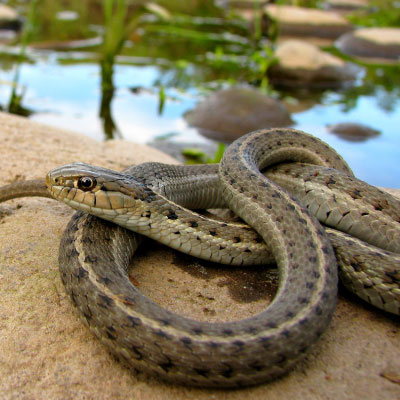 Imagine walking down a trail with tall grass along both sides. Out of the corner of your eye you spot movement. It’s as if some of the grass is moving in a different pattern from its surroundings. As you look closer you notice that what caught your eye was the smooth movement of dark spots and yellow stripes along the ground. As the snake comes out of its shelter of grass and crosses the trail you quickly catch your breath. The reaction is out of recognition and surprise rather than fear. As you watch, you see how the muscular body contracts in a constant flow that allows the armless and leg-less creature to smoothly move away from you, back into the grass, and out of sight.

Colorado is home to twenty-nine species of snakes. However, only a couple snake species are found slithering around Eagle County. Most commonly seen are Western Terrestrial Garter Snakes. Great Basin Gopher Snakes (also called bull snakes) are occasionally spotted in the lower elevation and drier areas in the west end of the county. Climate and environmental factors, like the length of the long and cold winter season,  are most notable explanations of why other snake species do not make the high mountains their home. Like all reptiles, snakes are cold-blooded and rely on the sunlight and their surroundings to provide enough warmth in order to be active, hunt and eat, and survive. During the winter and long periods of cold weather snakes enter a type of hibernation called brumation when a snake’s body temperature decreases, their heartbeat and respirations slow and their metabolism is depressed. For many snake species, Eagle County’s cold weather climate is too long for annual winter survival.

Western Terrestrial Garter Snakes can be identified by the two yellowish-white stripes down their bodies with black spots over a grayish-green base. Garter snakes can grow to be 18-41 inches long and about 1-1.5 inch diameter as adults. While not considered to be venomous, garter snakes have a mild neurotoxic venom in their saliva and are not dangerous to humans. Generally, wildlife prefer not be handled and garter snakes can expel a foul-smelling liquid from their anal glands when threatened. Garter snakes can be found in a wide range of forest and meadow habitat up to around 11,000 feet elevation and have a diverse diet and eat insects, fish, birds, toads, and small mammals. 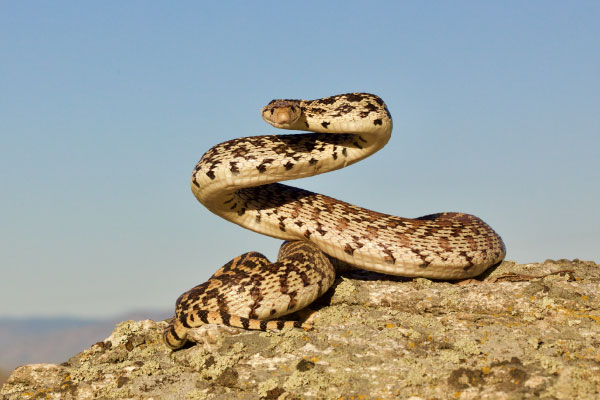 Great Basin Gopher Snakes are larger than garter snakes and can grow to about 4.5 feet long. Gopher snakes are tan in color with a dark brown blotched pattern along their backs and sides. These snakes are classified as constrictors and have a similar diet to the garter snakes. Both snake species can be found in similar habitat up to 9,000 feet and gopher snakes also thrive in deserts and shrublands. 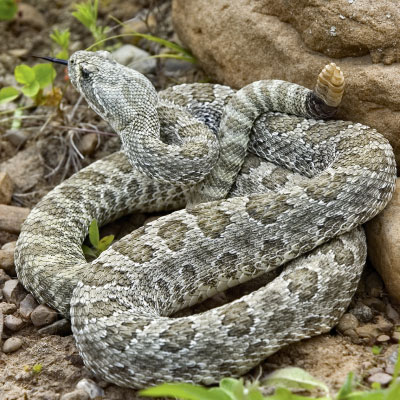 Although snakes often silently seem to appear from nowhere, take advantage to observe them during your encounters with these unique creatures. Imagine traveling through the world limbless with only the strength of your muscular system to maneuver through the grass and over logs. Watch where snakes travel while looking for their next meal. Hike with care and the confidence that snakes in Eagle County cannot hurt you.

Lara Carlson is the Senior Programs Director at Walking Mountains Science Center. While snakes tend to startle her when out on the trail, she enjoys watching them slither through their world.