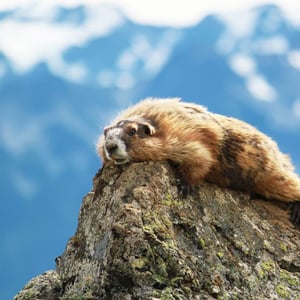 You may remember February’s favorite animal, the groundhog. The quintessential critter that holds the attention of the nation every year, declaring the extension of snow or the signal of spring. While people gather round each year at that time to heed the call of this pudgy prophet, the groundhog itself is likely more concerned with one very important thought: how much it would like to go back to sleep. Groundhogs and other hibernators spend the long winter months fast asleep in their homes, but as spring now awakens, so do they. Many animals whose presence lacked these past several months will soon make an appearance, crawling from burrows, searching for food and eventually introducing their young to the world.

Some of our resident hibernators here in Colorado include the marmot and the ground squirrel. These two species remain unseen by a majority of tourists that visit our area during the peak season of winter. These hibernators exist in a state of sleep so deep their heart rate decreases, their breathing slows down and their overall body temperature drops. So what might it feel like to wake up from a nap like this? Often, hibernators will emerge still feeling tired, as surviving the winter is no small feat. Over the course of the season, some hibernators can lose nearly half their body weight and fat reserves. However, just because it’s finally spring doesn’t mean it’s time to celebrate. Spring means getting ready for the full speed of summer. After spending a season in slow motion that requires some extra effort.

In both marmots and ground squirrels, we usually see the males exit a few days or weeks earlier than the females around late March or April. Having just regained their bearings and consciousness after a pretty serious sleep, it’s time to get to work. Mating generally occurs within the first two weeks following emergence from hibernation. For those winter tourists who didn't get the chance to see these animals in their natural habitat, marmots in the summer can typically be found sunning themselves in a rocky landscape.

Now, you may have been wondering about one other species typically mentioned in the talk of hibernation: bears. While bears do undergo an extended rest period during winter, they are not technically true hibernators. During the winter, bears experience torpor — a modified version of hibernation. When they awake, they are sluggish and slow to start, but soon, they will be hungry. This means that emerging bears have a tendency to be found where food is left around. For the most part, black bears are timid creatures and usually try to avoid contact with humans. However, they're opportunistic feeders and will search through human food sources to munch on whatever they can get their paws on.

To best keep you and your family safe from our emerging friends, it is best practice to not leave out any food or tasty smelling items, and to always cover and secure your trash. Remember, proper behavior and etiquette on our part can contribute to a safe and welcoming wake up for our napping neighbors!

To learn more about animals in our mountains, visit walkingmountains.org for online learning resources or future events. Keep exploring your curious nature.