Find me on:
LinkedIn

So, there we were. Approaching a rocky summit on a peak in the remote Gore Range named after a letter in the alphabet. We’d backpacked through willows and brush the day prior to set up a camp near a pristine alpine lake. We camped under the stars enjoying a cloudless night.

The next day, after an early “alpine start,” we scrambled over loose rocks and scree nearing our intended summit destination. Surprisingly, I started to notice we were being followed. We were no longer alone. I gave my partner a quick whistle to let him know something was up. He turned around and I asked him to stop at the next bench roughly a hundred yards above.

We took off our packs and sat down against a loose cliffside. By this point, I knew who, or what, was following us but I suspected he was currently unaware of the situation given his superior fitness level and more aggressive hiking style.

"Hey, we’re being followed,” I remarked. He peered down the “trail” we had just come up. The route we were on was not well marked, above treeline, and exposed.

"I don’t see anyone,” he replied. “We should push on so we can get to the top and back before the afternoon storms.”

"You don’t see the old bearded white dudes down there,” I said. “The furry ones with horns?”

He stood up and looked closer. Then he affirmed my suspicions.

"Oh yeah, I see them. Don’t worry about it, those ‘silly billys’ (slang for a male mountain goat) are nothing to worry about.”

Before continuing onward, I needed to pee. I found a good spot and did my business. At that moment, however, everything changed between us and our followers. They instantly became very attentive. They increased their pace and made quick progress to our location. Mountain goats are very agile and can jump 12 feet in one leap. I envied their prowess. It took me 20 minutes to traverse from their current location to ours. They made it look easy and were quickly preparing to overtake our small safe ledge. 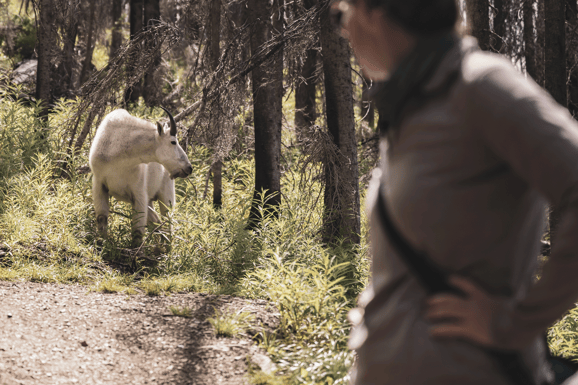 Mountain goats are also actually not goats. They are in the Bovidae family and associated more closely with antelopes, gazelles and cattle. They live in alpine and subalpine environments, sometimes even above 13,000 feet. This protects them from predators and like trees, you can tell their age by counting the rings on their horns.

Come to find out, mountain goats also really like salt. Because of our salty diets, human urine (and sweat) is packed with salts and minerals. Hence, mountain goats really like your pee. Peeing near a mountain goat can be like drawing moths to a flame. There have been many instances where mountain goats have developed such a taste for human urine and sweat that they have started to cause problems. In 2017, more than 300 mountain goats were airlifted from Olympic National Park in Washington to forests in the North Cascades due to them becoming a nuisance near heavily trafficked tourist areas.

Mountain goats can also be aggressive and their increasing contact with humans can be a serious problem. A hiker reportedly bled to death in 2010 after being attacked by a mountain goat.

At the time we did not know any of this and simply needed to get up and down the mountain safely. Our path of retreat was now blocked by the goats. They quickly overtook our small ledge and started pawing and chomping at the dirt that was now soaked by “my business.”

We decided to keep climbing up and away from the small ledge and our new furry friends. It seemed like a good idea, and frankly, it was our only safe option. They goats quickly followed suit. They were on our tail all the way to the summit. Upon reaching the summit we quickly needed to figure out how we were going to get down given the current four-legged urine-crazed obstacles in our path.

“Hey, do you need to pee,” I quickly asked my partner?

"How about if we do a little bait and switch,” I suggested. “Go over there on the other side of this summit and see if you can draw these goats away from us.”

He quickly implemented our haphazard plan and it worked perfectly. Upon completion, we swiftly reversed our path and returned the way we came all the way back to camp.

To this day, whenever I’m hiking in the alpine I can’t help but look over my shoulder before I water a tree because, after all, mountain goats really like your pee! 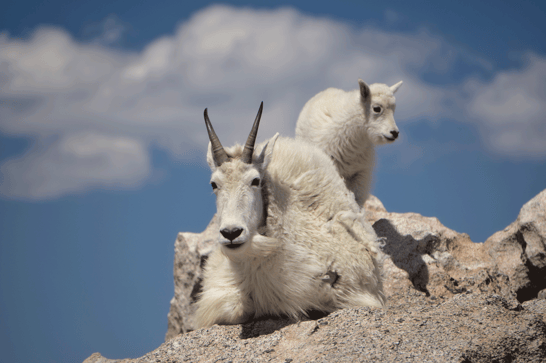 Paul Abling is the Marketing & Communications Director at Walking Mountains and lives in Eagle with his wife and two daughters.