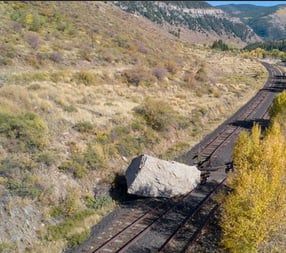 Today, Colorado's mountainous interior experiences four distinct seasons thanks to a temperate climate. However, 325 million years ago and roughly 100 million years before the existence of the first dinosaurs, a temperate climate was not the case. In the later part of the Paleozoic Era, the area of modern day Minturn was a tropical region, covered in shallow seas teaming with marine organisms such as tube worms, sea lilies and corals.

As millions of these organisms died and settled on the seafloor, they began forming the limestone layers of the Minturn cliffs. Fossils of corals found in the sediment of Lionshead Rock has led geologists to believe the rock formation was once part of an ancient coral reef. In addition to these limestone layers, sediments of the long eroded ancestral Rocky Mountains make up Lionshead Rock and surrounding cliffs. Formed from these deposits of preexisting rock and dead organisms compressed over time, Lionshead Rock is a prime example of a sedimentary rock. What goes up though, must come down and millions of years of erosion of these cliffs have shaped Lionshead Rock as we know and love it today. Although most of this erosion has been small and incremental over millennia, in 2014 Lionshead Rock changed suddenly and dramatically.

The falling of Lionshead Rock- Well, part of it
Residents in Minturn heard a loud rumbling around 8 p.m. on March 4th, 2014. Some residents described it as a helicopter while others thought it was a bomb, but in reality, it was a large piece of Lionshead Rock breaking off from the south side of the rock face. The boulder rolled down the mountain, breaking into two pieces on the way down. The boulders hit the railroad tracks, just missing the buildings located nearby. It is believed that the boulder cracked off due to the freeze-thaw cycle that commonly occurs each spring in Colorado. The freeze-thaw cycle is a process in which water melts and flows into the crevices of the rock, before refreezing and expanding. This happens over and over, slowly widening these fractures in the rock. In the case of Lionshead Rock, the freeze-thaw cycle eventually widened a crack so much that part of the rock broke free.

Lionshead Rock as it stands today
After the 2014 rock fall, the outlook for the remaining portion of the rock was uncertain. Luckily, the half of Lionshead Rock that did not fall is still standing today and functions as part of a popular hiking and mountain biking trail in the summer. The Lionshead Rock trail is a four mile round trip with just over 1,500 feet of elevation change. Once arriving at the top, you will see a beautiful view of the town of Minturn and the surrounding cliffs. As you look at the cliffs, look at the different shades of color in the bands that have formed, this tells the story of the formation of the cliffs and the seas that were once here. Then, take a moment to look down at Lionshead Rock and see if you can spot any of the fossils that have been preserved within the limestone, these fossils serve as evidence that Lionshead Rock was once a coral reef. Whether you are hiking to Lionshead for the first time or it is a regular route you enjoy, take a minute while you are up there to appreciate the view and the history that is held in this special rock.

Kelly Luebbering is a winter naturalist at Walking Mountains Science Center who is experiencing her first winter in Colorado. She has been enjoying snowshoeing and learning how to ski.