As kids, we stretched out in summer’s meadows and entertained ourselves by searching the sky for familiar forms in the clouds – a dinosaur here, a pig over there that magically morphed into a flying donut! At night, we did the same with the stars. Answering an ancient wisdom line in our DNA that leads directly to the First People, we tracked entire communities of stars. I remember seeing horses, snowmen, soup pots, and a monkey. And feeling proud when my parents confirmed that the pot was also known as the Big Dipper! We didn’t need television. We simply looked up. 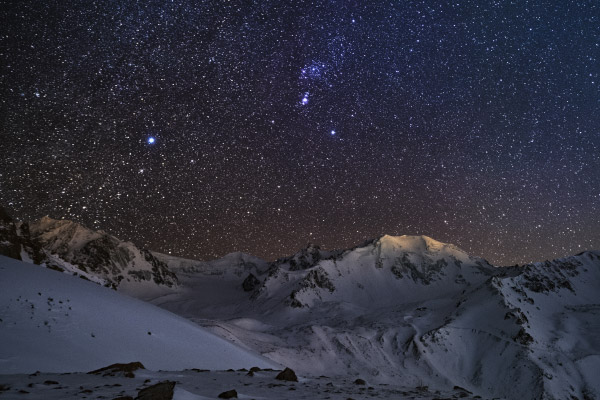 Later I learned that I wasn’t the first, nor the most sophisticated of star gazers. Ram, Archer, Bull, Twins, Scorpion, and Lion took center stage for me because they all had magnificent stories from ancient Greece that sparked my imagination. Constellations became dependable friends with mythological impact. No matter where I was, so were they, tracking their constant path across the sky. In today’s world of uncertainty, it’s nice to have such steadiness.
Deep winter is a crisp, sparkling time to connect with our star friends and make new ones. The new moon on February 1, also marked Imbolc, the first cross quarter of the year, halfway between December’s winter solstice, and the spring equinox March 20. The February Snow (aka Hunger or Sap) moon reaches its fullness just after Valentine’s Day, on the 16th.

The main show in February is Orion, a legendary Greek hunter placed in the heavens by Zeus, and master of our winter skies in the northern hemisphere. To locate Orion, look low in the southern sky for the brightest star right now, Sirius, also known as the Dog Star because of its prominence in Canis Major. Directly above Sirius, look for three brilliant stars in a row – the belt of the great hunter constellation.  Orion, adorned with a sword dangling from his sparkling belt, has been important in cultural cosmology throughout the world for eons. His belt is actually a bundle of nebula and stars being birthed in the arm of our galaxy. The bright red supergiant, Betelgeuse, defines Orion’s right shoulder, while Rigel, a blue supergiant, marks the hunter’s left foot.
Once you’ve located Orion, you can star-hop from there. Orion with bow raised, his two hunting dogs Canis Major and Canis Minor behind him, fights Taurus the bull, easy to recognize by his V-shaped horns, where the bright star Aldebaran shines. Just beyond, the Seven Sisters (Pleiades) offer a Greek chorus to the heavenly hunt. To the northeast of the hunter, the Gemini Twins watch the drama of the hunt unfold.

If you like connecting closer to home, look for our neighboring planet Venus displaying its brilliance as the morning star just before sunrise and even for a half hour afterwards on the 9th. 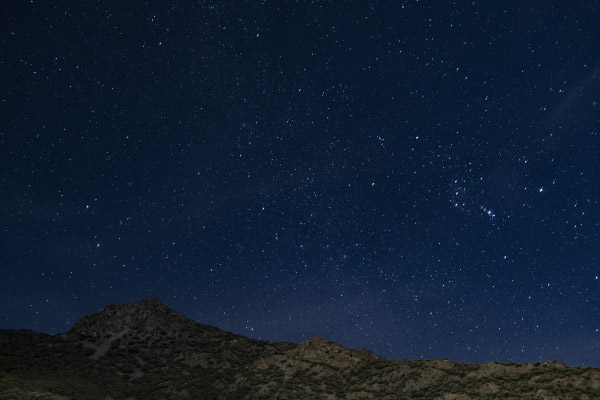 For the best stargazing, I like Wilderness Areas where there are no lights. In our valley, Eagle’s Nest Wilderness is easy to access from Vail via foot, skis, or car. Farther west, simply leave the I-70 corridor and venture onto abundant Public Lands for a nighttime snowshoe or ski under a canopy of stars. The scenic Colorado River Road provides easy car access to open vistas and dark skies.

A word about Star Gazing Apps. Great to look at indoors but leave them behind for the actual viewing. Your eyes keep having to adjust to light/dark and the app is a distraction to simply being with the night. Knowing and falling in love with the night sky is a long, even a lifetime process that connects us to all humans, past, present, and future. There is more to the relationship than naming constellations. It’s about connection: to curiosity, to the heavenly bodies that make up our starscape, and to every person everywhere who has or will look up at the bejeweled night sky and wonder. For more information, visit EagleSummitWilderness.org.