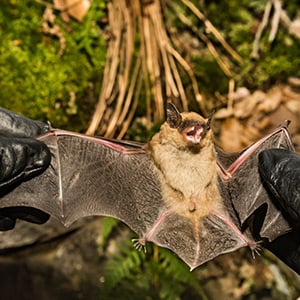 For centuries, bats have been shrouded in myths that have not always shown these nocturnal creatures in the greatest of lights. During Halloween, bat images are used as decorations for haunted houses and spooky neighborhood displays. Toothless, warty witches on broomsticks are often shown with a hoard of bats circling around them. We can’t forget about the fear that bats are fiendish vampires just waiting to suck the blood out of their next victim. To this day, some people still shudder at the vision of bats circling their heads waiting to entangle themselves in human hair and even give them rabies. People even believe that bats are blind! It’s disappointing that such an interesting creature is surrounded by so many irrational fears and superstitions. Have no fear, dear reader, today I am here to debunk some of the most popular myths surrounding our fascinating friend: the bat.

Bats are Not Rabid

Most bats don’t have rabies. According to a CDC study, of the bats able to be captured and submitted for rabies testing, only about 6% had rabies. You can’t tell if a bat has rabies just by looking at it. Rabies can only be confirmed in a lab, which means that a bat that is flying during the day and found somewhere it’s normally not, or appears unable to fly, could be sick. However, rabies in humans is rare and there are usually only one to two cases per year. That being sad, it’s never a good idea to handle any wild animal, including bats.

Most Bats Don’t Want to Drink Your Blood

Unlike what is shown in Dracula, bats won’t actually turn into vampires who want to hunt you down to drink your blood. However, there is a species of bat known as the Vampire Bat. Vampire Bats live in Latin America and mostly feed on cattle or other large animals. Their feeding is similar to that of a mosquito where they only lick a small amount of blood from their source. The saliva of the Vampire Bat also contains an enzyme that prevents the blood from clotting while feeding, which is being used to develop an anti-blood clotting medication known as, get this, draculin.

Bats Are Not Blind

Bats aren’t blind, they can actually see pretty well. Some larger fruit eating bats can even see three times better than humans. Even though they aren’t blind, bats still rely on something other than their sense of sight to hunt. To navigate and find their prey at night, bats use echolocation, the use of sound waves and echoes to determine where objects are in space. These talented creatures produce soundwaves, known as ultrasound, in frequencies above our own ability to hear, similar to how humans are unable to hear the high frequencies of a dog whistle. The sound waves are emitted from a bat's nose or mouth and then bounce off objects in the area and return to their ears. Bats have different calls for different purposes like searching, feeding, and even social calls. For example, when a bat finds an insect it wants to eat for dinner, it sends out a rapid series of calls to locate exactly where the prey is and then it swoops in and snatches a tasty meal. With such a cool skill, it’s probably best that bats can’t actually turn into vampires…

Bats aren’t scary, but their future is frightening. White-nose Syndrome is a fungal disease that causes high death rates and rapid population declines in bats. This fungus that actually appears as a white growth on their noses, affects bats during hibernation and causes them to wake up more frequently and waste their energy and fat reserves. White-nose Syndrome is spread by bats interacting with other infected bats or habitats and even from humans carrying the fungus on their gear. Bats have more of a reason to fear us than we have to fear them! Don’t believe these silly bat myths, instead try to help protect these incredible animals. Avoid disturbing bats, contact a professional who uses humane methods to remove bats from your home, promote natural bat habitats and consider building a bat house. It’s up to us to bust these bat myths and protect our nocturnal neighbors.

For more information on how to help bats, please click here.