Meow, wow! Do you know what today marks the beginning of? It’s National Cat Week! Beginning on November 6, this week has been celebrated during the first full week of November since 1946. Originally, National Cat Week was established by the American Feline Society by its then-president, Robert Lothar Kendell. National Cat Week highlights the intelligences, personalities and qualities of our feline friends and raises awareness about how many domestic cats in our world do not have humans to love them and the encouragement to adopt.

In last week’s Curious Nature, domestic cats were highlighted for causing detrimental harm to our local bird and small mammal populations. While our domestic cat friends should remain indoors, there are a few felines that are known to live in our backyard here in the wilds of Colorado. Let’s highlight the three native-wild feline friends that share the Rocky Mountains as their home - these wildcats are mountain lions, bobcats and lynx.

First, we have the bobcat. Weighing in at 11-30 pounds, they are roughly twice the size of a domesticated cat. Bobcats are easily distinguishable for their black-tipped, stubby or “bobbed” tail. They also have short-tufted ears, a grayish-tan and black spotted coat and straight back. In Colorado, bobcats are thriving as their food of squirrels, mice and rats are plentiful in the variety of deciduous, coniferous and mixed woodland habitats they live in. It is also known that larger bobcats may prey upon domesticated cats that are outside. More than 12,000 bobcats are estimated to be in Colorado and the most abundant of the North American wildcats. 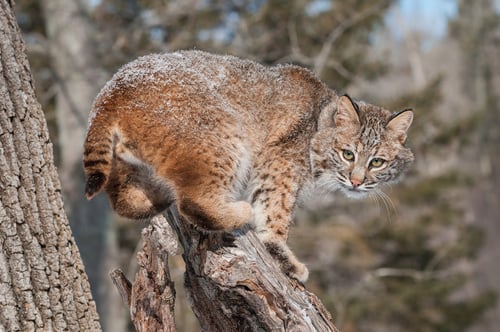 Bobcat
The next is the Canada lynx. Bobcat and lynx are part of the same Lynx genus, identifying between the two can be challenging at first glance. Lynx are larger in size with longer ear tufts that have black tips. Their paws are longer and larger, have minimal spotting and arched back. Like a bobcat, their tail is short, but no black banding on the tip. Here in Colorado and in North America, the lynx inhabits forest and tundra regions. Lynx feed exclusively on snowshoe hares, but will feed on medium-sized mammals and birds if hare populations deplete. Canada lynx were reintroduced to Colorado in the 1990s and are considered endangered in the state. Studies suggest there are an estimated 150-250 individuals here in Colorado, but are hard to count as they are highly more elusive to spot than its bobcat cousin. 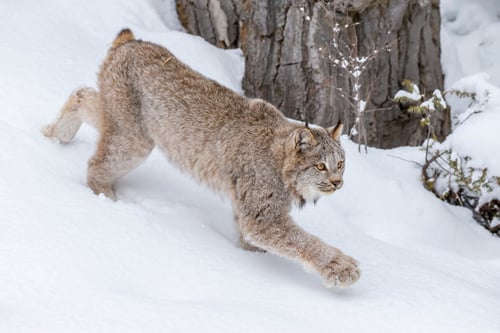 Lynx
Lastly, we have the largest wildcat, the mountain lion. Their habitat ranges from desert to subalpine mountains, tropical forests, and at times can encroach into neighborhoods and urban settings. Weighing 100-220 pounds, mountain lions are apex predators of the Rocky Mountains that will prey upon deer, bighorn sheep, moose, elk and mountain goat. They are slender in physique, a tawny to red coat, large paws and long tail and legs. It is estimated that their population ranges from 3,000-7,000 in the state. 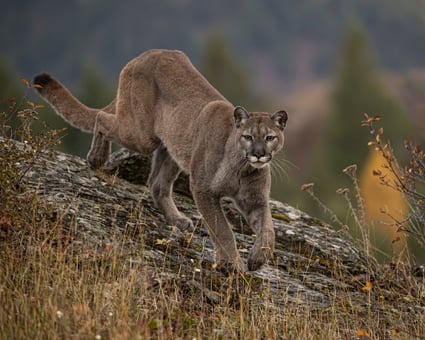 Mountains Lion
While all three of these wildcats are able to thrive in the outdoors of our Colorado backyard, it is important to prevent interactions with our domesticated cat friends from these wildcats. Not only have there been reports of these wildcats attacking domestic cats, but between all these cats, they can contract and share the same diseases, such as Bartonellosis and Toxoplasmosis, and spread to people.

Christina Belardo is the Girls in Science Manager at Walking Mountains Science Center who owns a beautiful INDOOR cat named “Ted the Cat”. In her free time, she is a scientific illustrator exploring the outdoors through pens and a sketch pad.