Ode to a Bristlecone Pine 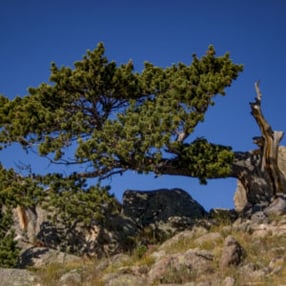 510 BCE: Rising from a mountain’s shallow soil, a bristlecone pine begins its life. This Rocky Mountain bristlecone pine is one of the oldest trees in the world, only outlived by its cousin the Great Basin bristlecone pine. As this tree grows from a seed to a sapling the first Mayan calendars are carved into stone. Each summer the tree grows, and each winter its growth slows. As time passes, Mayan dates are etched in stone. This bristlecone pine also marks each year of its life through the consecutive growth rings that document the seasonal ebb and flow of its growth. Civilizations rise and fall while this tree grows steadily on a mountainside in Colorado.
376 BCE: Just over a century after this bristlecone began its life on the mountainside, Alexander the Great is expanding his empire around the Mediterranean and into Asia. Our bristlecone expands its empire too, spreading its seeds by wind and birds. Bristlecone pines colonize after wildfires, creating life from ashes. Now our tree is over double the height of Alexander the Great with its bark getting rougher and more furrowed.

750 CE: Over a millennium since its birth, the bristlecone is still standing on the mountainside in the Rockies as trade is flourishing along the Silk Road on the other side of the earth. The Silk Road connects China and the Far East with the Middle East and Europe, allowing the flow of goods like silk, tools, and precious stones. The Bristlecone’s roots have spread as well, and branch through the rocky soil like the branching trade routes through Eurasia. As this tree ages, some of its limbs begin to die and its trunk is weathered by blowing ice and soil.

1580 CE: In the tree’s second millennia it is rooted on the mountainside as the Ute people, living and hunting around Colorado’s mountains and valleys, begin to use horses acquired from the Spanish. Perhaps, hunters or travelers ride by this tree as it stands watch over the landscape.

1600 CE: In the middle to end of the second millennia the bristlecone sees colder temperatures and snowier winters. People, plants, and animals alike struggle with much colder winters and food shortages as the world enters the Little Ice Age. Colorado’s arid, cold, and often windy climate takes its toll on the tree and it becomes gnarled and twisted, with only a few strips of living bark connecting the last living branches.

1992 CE: This tree stands still for the scientists who come to study it and estimate its age. While portions of this old tree are now dead and weathering away, one thin strip of living wood and bark connects its roots to its branches. Trees of its generation, and many of its offspring, have ceased living long ago but their weathered trunks and branches remain. The arid climate combined with the tree's resinous wood makes it resistant to rot and decay.

2021: The Rocky Mountain bristlecone pine’s roots have held it steady on the mountainside for over 2000 years. Civilizations have risen and fallen, ice ages have passed, its bark has grown gnarled and twisted, but each passing year our bristlecone still adds one more growth ring to its truck and continues its watch over the mountainside.

Hannah Fake is a winter naturalist at Walking Mountains Science Center. She enjoys admiring big trees and wondering what they may have seen in their lifetime.