What animal can leap 10 feet in a single bound, prey on animals up to eight times its size, and run faster than an Olympic sprinter? Welcome to our local Super Kitty, the bobcat. Just over twice the size of a housecat, these wildcats are native to Colorado - and they’re thriving. 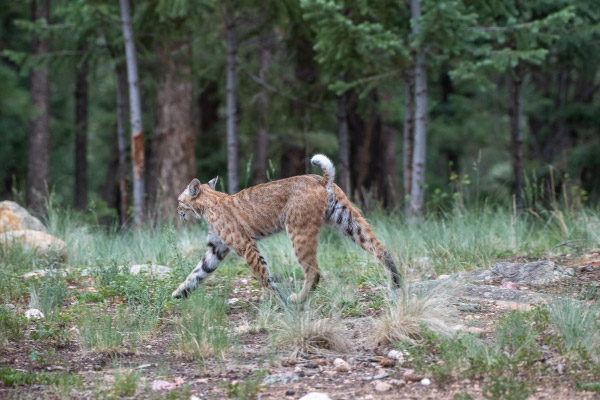 In fact, bobcats are the most abundant of North American wildcats and have the largest range, from southern parts of Canada to central Mexico. It’s estimated that upwards of 12,000 bobcats live in Colorado. But count yourself lucky if you see one - bobcats tend to be secretive and elusive.

You are more likely to see a bobcat’s tracks. About 2 inches long and slightly smaller in width and showing four toes, bobcat tracks lack claw marks because cat claws are retractable. Also, like all cats, bobcats’ hind prints “directly register,” landing right on top of fore prints. This leaves less of a trail while also minimizing loss of footing or snapping branches - advantages for both defense and hunting.

Speaking of hunting, bobcats are consummate pros. Active throughout the year, they stalk their prey and pounce, preferring stealth to long chases – although they can run 30 mph and even swim. While rabbits are their favorite food, bobcats will eat mice, voles, and birds, thus playing an important ecological role in controlling these populations. Bobcats can also prey on much larger animals, such as deer and sheep. Great climbers, they will wait on overhanging branches and rocks, ready to deliver a deadly pounce from as far as 10 feet. Bobcats have sharp hearing and vision, and a good sense of smell – helpful skills since they generally are “crepuscular,” referring to their tendency to hunt during twilight hours around dusk and dawn.

Adaptable and able to survive in different habitats, bobcats prefer mesas, canyons, and foothills with brush and woodland habitats that provide good hiding places. They have a life expectancy of 7-15 years in the wild. A female bobcat is called a “queen,” and male bobcats are “toms.” Bobcats are generally solitary and territorial, but a tom may travel with a queen from winter to spring, mating multiple times. Females are pregnant for about 10 weeks. Kittens are born in April-May, under a rock or log, with an average of three per litter, and stay with their mother until fall.

Bobcats (Lynx rufus) are often mistaken for their close relative, the Canada lynx (Lynx canadensis). Bobcats are much more numerous (compared to only 150-200 Canada lynx statewide). At about 3 feet in length and 30 pounds, bobcats are only slightly smaller than lynx, and both have 4- to 6-inch bobbed tails – from which bobcats get their name. A few distinguishing features: Canada lynx have longer black ear tufts and more-prominent facial ruffs, larger hind legs and feet, a solid black tip on their tails, and long grayish-brown coats in winter (reddish in summer). Bobcats’ coats have more-distinct striping and spots, although our Southern Rockies bobcats are paler than bobcats from other regions.

Again, tracks can help distinguish: Canada lynx have built-in furry, snowshoe-like rear paws that provide an advantage when hunting their preferred prey, snowshoe hares. Because lynx paws are furry, their tracks don’t show toe pads as clearly. In contrast, bobcats with their tinier paws aren’t powder hounds – they don’t move well in deep snow and will wait out heavier storms in sheltered areas. 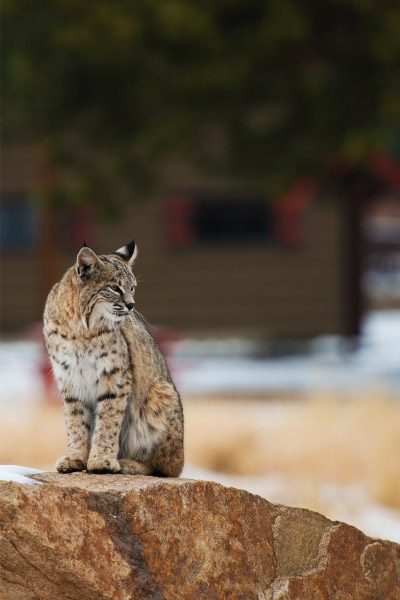 Bobcats’ main predator is, well, us! Bobcats have long been hunted for their beautiful, silky, spotted coats. Colorado Parks and Wildlife allows hunting and trapping of bobcats. Their website provides detailed guidance to avoid confusing bobcats with Canada lynx, which are protected under the Endangered Species Act.
Bobcats’ fierceness, speed, and tenacity have led to their name being adopted by sports teams and even a heavy-equipment company. But on the softer side, just like our pet kitties, bobcats also purr!