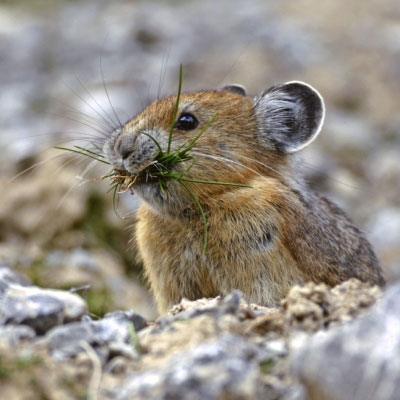 I’m at almost 11,500 feet, hiking to our research sites in the Front Range when I hear chirping and turn to see a small mammal scurrying across the rocks. The large, rounded ears are a dead giveaway: I’m in the presence of an American pika and I very well might be the predator it’s attempting to warn the rest of its colony about. American pikas grow to be seven or eight inches in length, are brown and black to camouflage themselves amongst the rocks, and do not have a visible tail. They are one of the few animals in the lower 48 that can live out their entire lives above tree line in the alpine.

Pikas are herbivores, meaning they eat the grasses and wildflowers found in the high alpine. Because they have few options for food during the colder months, they spend the summer and fall drying food for the winter. They collect extra vegetation, lay it out on the rocks to dry (preventing mold later on), and store it in hay piles. They do not hibernate during winter, instead growing an incredibly thick coat of fur. This coat thins out somewhat in the warmer months, but still remains thick enough that pikas can easily overheat and die in prolonged temperatures as mild as 78 degrees Fahrenheit.

It is well-known that our polar regions are warming more rapidly than the rest of the planet, but this phenomenon occurs in the mountains as well. For species like the American pika, the consequences can be disastrous. Alpine environments are generally isolated from each other—often referred to as “islands in the sky”—which makes travel between suitable habitat nearly impossible. In addition, pikas already live at the tops of mountains so as other species move upward for relief from warmer temperatures, they have nowhere left to go. 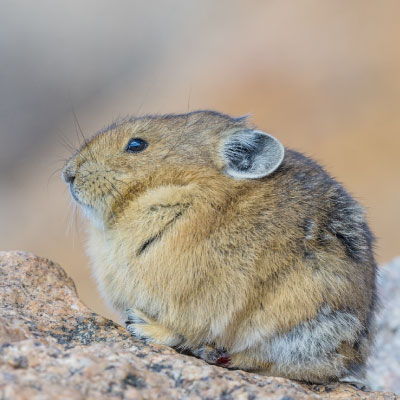 Locally, the Front Range Pika Project (FRPP) works to monitor pika populations in the Front Range, Rocky Mountain National Park and White River National Forest. It trains community scientists to complete surveys on the presence and absence of pika as well as identify characteristics of the habitat.

There are also many ways to combat climate change on an individual level! We can reduce our carbon footprints by consuming less meat and dairy; choosing to use public transportation, carpool, bike or walk to our destinations; reducing our overall consumption of goods; recycling and composting; and improving the energy efficiency of buildings.

If you are not sure where to start with improving the energy efficiency of your home or office, Walking Mountains offers energy assessments through our Energy Efficiency Programs in partnership with Energy Smart Colorado. The more we work towards lowering our carbon footprints and slowing down climate change, the better chance species like the American pika have for survival in the coming decades. Hiking in the alpine would definitely get a little quieter and a little less magical without these rock rabbits dashing across the talus, living year-round in an area most are only capable of visiting.

AJ Lodge is a winter naturalist with Walking Mountains Science Center. They can be found wandering the trails at all hours of the day, basking in the sunlight and chasing the call of the wild.