Reintroduction of the Lynx in Colorado 20 Years Later 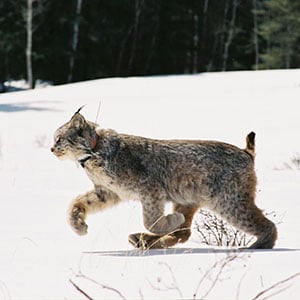 How was the Colorado lynx reintroduction different than the 2020 ballot measure to reintroduce wolves?

All the photos in this Curious Nature article were taken in the spring of 2005 at the last lynx reintroduction in Colorado by Stephanie Sutton, formerly of Walking Mountains.

A Success Story: The Return of the Lost Lynx to Colorado

The Canada lynx (Lynx canadensis) is back and hopefully here to stay due to a reintroduction effort 20 years ago. The first-ever lynx reintroduction took place here in Colorado. Lynx populations were struggling through much of the 1900s and were finally extirpated from Colorado by the 1970s. Colorado Parks and Wildlife (CPW) reintroduced lynx, bringing them back to the lands they previously roamed.

By the end of the 20th-century, lynx population numbers were so low across the country the species was close to being listed under the federal Endangered Species Act. Colorado had an opportunity to help lynx populations through reintroduction. The hope was that lynx could be brought back to Colorado and populations would become stable and avoid federal management. Lynx are a native species to Colorado and many wanted to help them return to keep our environment whole. An environment with all its parts or individuals is more stable and resilient than an environment missing a piece, especially a predator.

The Canada lynx is a member of the cat family that prefers to live a solitary life in mountainous areas with cold snowy winters. They are adapted to harsh winters with their thick, warm coat and massive paws that act like snowshoes, preventing them from sinking in deep snow. Lynx primarily eat snowshoe hares but will prey upon other animals such as mice, squirrels, or birds.

From 1999 to 2006, 218 lynx were brought to Colorado, three or four at a time, from Alaska and Canada. Before their transport each lynx passed a vet check to ensure they were healthy. Once they arrived in Colorado they were acclimated and later released on public land in the San Juan range.

Why did CPW end the reintroduction efforts in 2006? By 2006 the lynx population was meeting the benchmarks. The introduced lynx were surviving well, individuals had spread throughout Colorado and beyond and they were reproducing. For three years prior to 2006 reproduction was exceeding mortality; we had given lynx the help they needed to become re-established in Colorado.

Today, CPW estimates there to be between 150 and 250 lynx in Colorado and the reintroduction effort is considered a success. It is difficult and resource-intensive to exactly measure lynx populations as they are an elusive species that live in difficult to access areas, especially in winter. Game camera footage and reports of tracks are common ways CPW estimates lynx populations. While it may seem like there are still not many lynx in Colorado, this is natural as they do not have dense populations. They require wide ranges and live mostly solitary lives; they are the cat that prefers its space and minimal human presence.

In 2020 Colorado voted to reintroduce gray wolves (Canis lupus). This is the first reintroduction effort that has been decided by a public vote in the US. While the lynx reintroduction effort was successful in Colorado wolves and lynx are two very different species that each have their own unique challenges. Some lessons learned from lynx may be applied in the wolf reintroduction, but it is likely the project will still face many of its own challenges. Starting in 1995 wolves were reintroduced in Yellowstone National Park and in central Idaho which was also considered a success. While lessons can be learned from those reintroductions, Colorado’s effort will have its own challenges to work out.

Hannah Fake is a winter naturalist at Walking Mountains Science Center. She loves the mountains in all seasons and admires the critters who survive the seasons at elevation.