In the state of Colorado, outdoor recreation is a $62 billion dollar industry that supports 511,000 jobs (numbers reported by the Colorado Office of Economic Development and International Trade). This includes money spent on trips and equipment from Colorado residents and non-residents, and the salaries and wages of employees in the outdoor industry. Especially in our corner of Colorado, the economy is driven by visitors hoping to explore the trails, rivers, ski slopes, and wilderness. 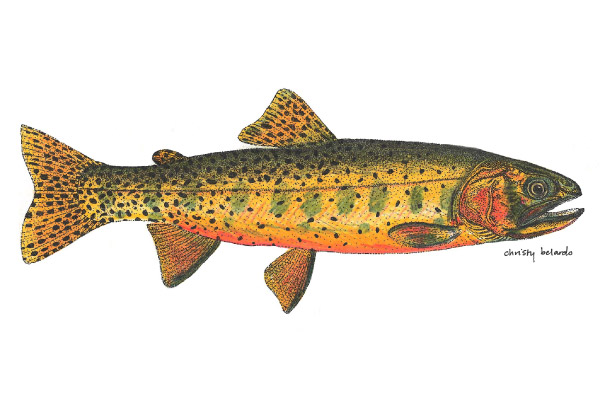 The Fishing industry accounts for 29% of that economic output. Anglers from all over the world flock (or should I say “school”) to the gold medal trout streams of Colorado. They come in search of our native crown jewel, the Cutthroat Trout.

Don’t let the name intimidate you, Cutthroat Trout have to be tough to survive in a watery world and maintain their status as Colorado’s only native trout species. However, their name comes from the distinctive red “slash” of color across their “throat,” not from their tough reputation. They primarily feed on aquatic insects and grow to an average of 8 - 10 inches long and live in high mountain lakes and streams that have a mix of cool, deep pools and fast-moving riffles and rapids. Cutthroat Trout spawn in the spring and the newly hatched fish (a.k.a. fry) emerge from the gravel stream bottom 1 - 2 months later.

Four subspecies of cutthroat trout are native to Colorado: The Yellowfin Cutthroat (currently believed to be extinct); the Rio Grande Cutthroat in the San Luis Valley and New Mexico; the Greenback Cutthroat (Colorado’s official state fish) in the South Platte River Basin; and the Colorado River Cutthroat on the western slope, including Eagle County. The Colorado River Cutthroat subspecies is divided genetically into three separate lineages: the San Juan, Green, and Blue lineages. These genetically distinct populations were historically separated by geographic barriers like mountain ranges. Research is currently being done to learn more about the genetic purity of different lineage populations, and the extent of each lineage’s historic range. 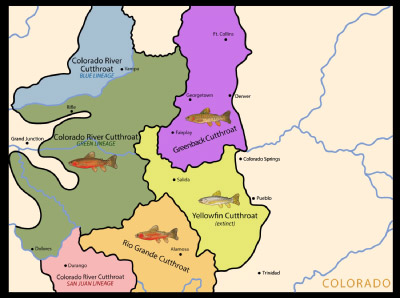 This little fish with a big reputation is currently threatened by a variety of past and present human actions and natural stressors. Human activity like logging, mining, the spread of invasive species, and water diversion is resulting in the loss of habitat for the Cutthroat Trout. Climate change and resulting wildfires, debris flows, and droughts could further limit available habitat. Stocking rivers and lakes with non-native fish species, like Rainbow Trout, and the wrong genetic lineage of Cutthroats in the 1880s - 1980s resulted in a separate set of problems. Now Rainbow Trout and Cutthroat Trout can hybridize to make Cutbows. Mixing green and blue genetic populations can permanently alter the genetics of the Colorado River Cutthroat Trout. As a result, this subspecies of Cutthroat currently only occupies 5% of their historic range.

So what can we do to help support the conservation of this species? Work is being done by state and federal agencies in partnership with local landowners and research biologists to help protect, restore, and connect suitable habitat for the Cutthroat Trout. Additional efforts are being made to help isolate genetically pure populations and prevent future hybridization and competition. By cleaning and disinfecting your fishing equipment when you move between water sources, we can prevent the spread of aquatic invasive species.

Through stewardship of our rivers and streams and responsible recreation, we can help keep the Colorado River Cutthroat Trout, the outdoor industry, and the economy in Colorado happy and healthy.

Carrie Anderson is the Environmental Leadership Coordinator at Walking Mountains Science Center. She is often seen exploring the wild places, trails, and ski runs in the White River National Forest and beyond.