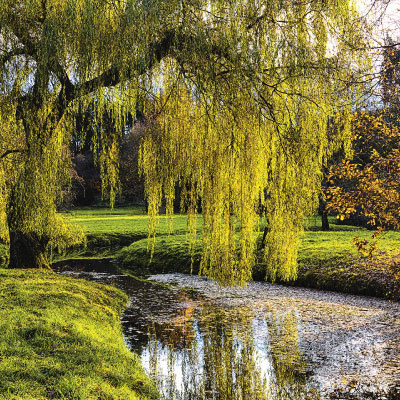 A classic story of early western exploration begins in a thicket of willows. A band of explorers surprise an angry grizzly bear and an epic battle ensues. Although details of this story change with each dramatic retelling, it always begins with a bear and a willow bush.

You will no longer encounter grizzly bears in Colorado, but willow plants remain plentiful. If you have ever taken a walk along a creek or alpine stream, it is likely you were not far away from a willow shrub. You can spot willows by their waxy, thin green leaves and tiny flowers that grow into spikes called ‘catkins’. Willow is    a dynamic species. Sometimes they appear as shrubs, and sometimes as trees. The mountain willow has bright yellow twigs, while the plane-leaved willow has shiny red branches. Ironically, the yellow willow actually has brown twigs. The many varieties of willow can sometimes be difficult to distinguish.

Willows are valuable to both human and animal communities. For hundreds of years, people have chewed, boiled and ground willow into pain-relieving salves and snacks. Willow bark contains salicin, which is similar to the active ingredient in aspirin: acetylsalicylic acid. Willow has been used to treat everything from arthritis, headaches, digestive problems and heart disease to insect bites and minor burns. Ancient Romans even prescribed willow to curb “inappropriate” sexual behavior. Despite all these interesting uses, it is probably not time to cancel your doctor appointment just yet, as there is still limited research on the medicinal benefits of willow. 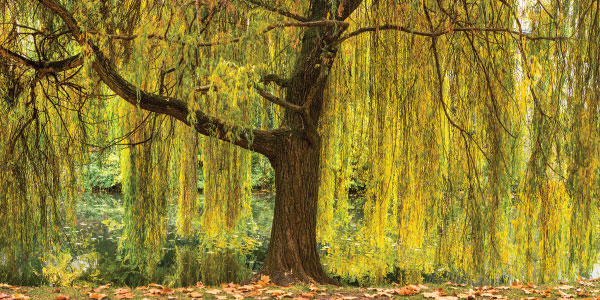 Throughout history, snowshoes, fishing traps, hoops and meat racks were all built from willow branches. The strong but flexible twigs and branches made for highly useful construction material. Bark from the willow could even be chewed for squeaky clean teeth and cavity prevention. Willows aren’t just important to humans though, many animals depend on them too.

Willow is an important part of a balanced diet for deer, elk, moose, rabbits and many other species. While elk and deer tend to forage on willow in late summer and fall; moose treat willow like an all-you-can-eat buffet and feast all year. An adult moose needs to consume 40-60 pounds of food per day (the equivalent of 240 cheeseburgers!) which can sometimes put stress on willow communities. In some zones were natural predators of moose, deer and elk have been extirpated, willow populations have declined.

Willows have captured the imagination of storytellers, explorers and communities across the western United States. They are used as habitat and sustenance by animals and as building material and health remedies by humans. Aches, pains and even heartburn are no match for the mighty willow. Next time you are out hiking near a stream or pond, keep an eye out for nature’s original superfood: the willow.

Rachel is a community programs coordinator at Walking Mountains Science Center. She lives with her pet rabbit Bunbun, who is a BIG fan of snacking on willow branches.