Colorado is home to several species of canines. Foxes, coyotes and wolves are all members of the dog, or canine family. Coyotes and foxes are Colorado’s most common resident canines while gray wolves have been spotted occasionally in the northern part of the state, likely having wandered over from Wyoming. Recently, Colorado voters passed a ballot initiative to reintroduce wolves in the state so wolves may become a more permanent resident. Colorado’s canines usually keep to themselves but occasionally conflicts can arise between species.

So who is the top dog?

Four species of foxes inhabit Colorado, including the little swift fox that lives on the eastern plains and the kit fox that lives in the western desert shrublands. The swift fox and kit fox weigh only four to seven pounds! Gray foxes are larger, weighing nine to eleven pounds, and live in brushy areas in the foothills and canyonlands. Locally, the red fox is most common. It is similar in size to the gray fox but prefers more woodland, wetland and forest edge habitats. Due to differences in habitat, these foxes rarely interact with each other. 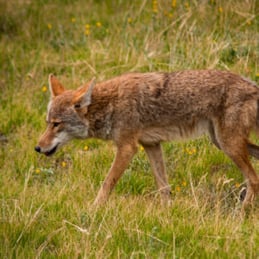 Most often foxes, coyotes and wolves avoid each other. However, when interactions occur they are usually around a carcass. Coyotes and foxes are both opportunistic hunters, scavenging or hunting small mammals, birds and their eggs, small reptiles and amphibians. Coyotes are larger than foxes and will use hostile body language, chase foxes off, or occasionally kill them if they are competing for food. Between foxes and coyotes, the coyotes are usually the top dog. 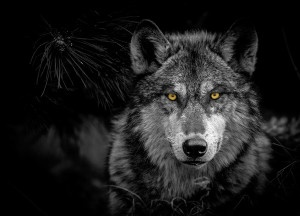 When wolves enter the ecosystem the coyote’s dominance is threatened. Wolves and coyotes are both predators but wolves prey on large animals, mainly deer, elk and moose. Wolves themselves are much larger than coyotes, weighing 70-150 pounds and reaching up to 6.5 feet in length compared to the 15-50 pound coyote that is not greater than 4.5 feet in length. Because wolves often live in larger packs than coyotes, both their size and numbers help them keep their spot at the top.

What happens when you remove the top dog? Environments missing a top predator like a mountain lion or a wolf can experience an ecological phenomenon called mesopredator release. With the absence of a large predator, like the wolf, smaller predators like coyotes and foxes can expand their range and face fewer threats. The loss of the wolf can be felt further down the food chain as smaller mammals face higher rates of predation because there are more predators like coyotes and foxes. The structure of ecosystems can be impacted through mesopredator release. Return of the apex predator can help restore balance.

Interactions between humans and wildlife are increasing as we continue to expand our range into wild places through recreation and development. Coyotes and red foxes are reasonably tolerant of people and are known to inhabit more urban areas. Of course, Colorado is also home to many pet dogs that differ from their wild relatives in behavior, looks and genetics. Wild canines are rarely a threat but keeping our pets safe is easy. Not letting pets out alone after dark, keeping dogs on a leash and picking up smaller pets if you do encounter a coyote or a fox will help reduce negative interactions. Properly storing trash and bringing pet food inside will help protect your pets and local wildlife.

Colorado’s canines generally avoid each other, but there is a dominance hierarchy when conflict arises. Size, both of group and the canine itself usually dictates the winner of a conflict. Among Colorado’s native canines, the prize has to go to the gray wolf, who will be returning soon to reclaim its spot at the top. What changes will the return of Colorado’s top dog bring to our ecosystem? Time will tell, but here in Colorado’s western slope, we’ll get a front row seat.

Hannah Fake is a Naturalist at Walking Mountains Science Center. She loves hiking with her pup, Farley, and thinking about how different his life is compared to his wild relatives.