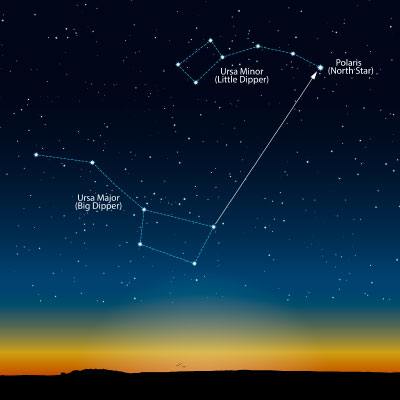 The seven stars that create the Big Dipper’s recognizable ladle make up the bear’s uniquely long tail. There are many stories of how Ursa Major got its long tail. In Greek mythology, Ursa Major represents Callisto; a beautiful nymph and huntress with whom Zeus, the god of the sky, fell in love with. Zeus fathered Callisto’s son, Arcas, and out of jealousy Hera, Zeus’s wife, turned Callisto into a bear forcing her to spend the rest of her life roaming the woods. Years later, Callisto’s son Arcas became a great hunter himself. One day, he encountered a bear in the woods and took chase not knowing the true identity of the bear was his mother. Zeus stopped Arcas just before he threw his spear to kill her. In order to protect her, Zeus hoisted Callisto into the sky by her tail, stretching it to an abnormal length.

There are numerous versions of this myth. In one version of the story, both Callisto and Arcas were thrown to the heavens, becoming Ursa Major and Ursa Minor (“Little Bear”). They were forced to circle the North Star and never allowed to rest beneath the ocean, explaining why the constellation is visible in the Northern Hemisphere year round.

In some Native American cultures, the three stars in Ursa Major’s tail represent three hunters pursuing a bear. The hunt lasts from spring to autumn, until the hunters finally pierce the bear with their arrows. The constellation drops much closer to the horizon in the fall and the blood from the wounded bear spills onto the earth, changing the colors of the leaves. 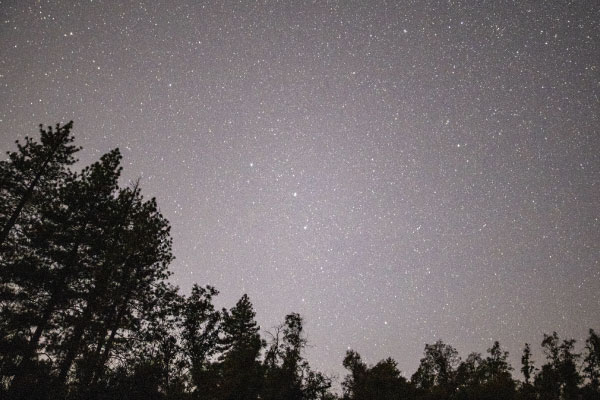 The significance of Ursa Major goes beyond mythology. The Big Dipper has been a significant tool in navigating the night sky for generations. The Big Dipper can help beginning astronomers identify the North Star, Polaris. If you look at the two stars on the end of the Big Dipper’s bowl, Dubhe and Merak, they create an imaginary line you can follow to Polaris.

This is exactly what many slaves did before, and during the Civil War, in an attempt escape slavery. Many slaves did not know how to read and lacked access to navigational tools. However, even without maps or compasses, escaping slaves could read the stars. By using the Big Dipper to find Polaris, slaves could navigate North in search of freedom.

Ursa Major has deep meaning and history in many cultures, and it is important that these legacies continue. However, our lamps, headlights, and other forms of artificial light are quickly polluting the night sky. Imagine what the night sky looked like before electricity! Even something as simple as turning off your lights when you’re not using them can help reduce light pollution and help you better experience the night sky. However, if you want to get the best stargazing views, it’s best to get away from the city.

Colorado is home to numerous designated International Dark Skies, including Dinosaur National Monument, Mesa Verde National Park, Westcliffe, Ridgway and more. These areas offer beautiful stargazing opportunities, especially during a New Moon. The next time you find yourself looking at a dark sky, think of all the stories the stars tell and the impact we have on them.

Katie Wareham is a Summer Naturalist at Walking Mountains Science Center. She loves exploring the outdoors, and can often be found lying in the grass staring at the stars.