Brrr, it's cold outside. Or is it? Depending on where in the world you grew up, Colorado’s winter weather may feel colder or less cold compared to what your body is used to. Mid-winter in Vail the average low temperature is around 5oF to 9oF with average high temperatures right around freezing at 32oF. These temperatures are ideal for creating and maintaining a solid snowpack, yet comfortable enough to spend time outdoors recreating in the winter environment without getting too cold. 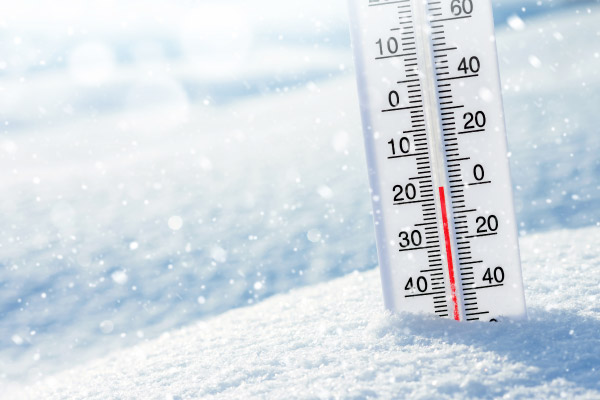 Measuring temperature likely has always been part of human awareness. Historically even early humans could adjust the temperature of their surroundings using fire or cool water, but measuring and quantifying temperature came more recently. Galileo invented the first thermoscope to indicate temperature differences in 1592. The first thermometer is attributed to Santorio Santorio in Italy in 1612. Since then, over thirty-five different temperature measurement scales were developed, used, and improved upon. The three most common temperature scales used today are measured in Fahrenheit, Celsius, and Kelvin. 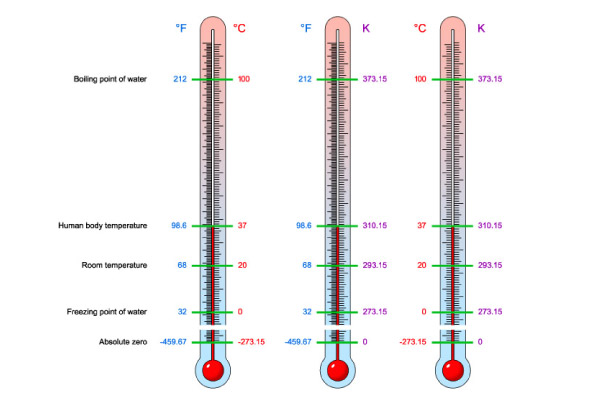 Swedish astronomer Anders Celsius developed a version of the Celsius temperature scale in 1742. However, Celsius’ original scale placed the measurement of 0oC as the high boiling point of water and 100oC as the low freezing temperature. Other scientists later reversed Celsius’ scale with the increasing progression we use today. The Celsius scale assigns one hundred points of measurement at even intervals between the freezing and boiling points of water at one atmosphere of pressure, meaning at sea level. Although the Fahrenheit and Celsius scales are not designed to align, the conversion between the two can be calculated as C=5/9(F-32). The Celsius temperature scale is a common International System (SI) temperature scale, although the official scale is Kelvin.

Scottish professor Sir William Thomson, later known as Lord Kelvin, invented the Kelvin scale in 1848 to measure the ultimate extremes in temperature. Lord Kelvin identified the scientific need for an absolute thermodynamic temperature scale where “infinite cold” is absolute zero. Unlike the more arbitrary Fahrenheit and Celsius scales which are built around water’s freezing point, the Kelvin scale relates directly to kinetic energy and volume with measurement beginning at the lowest possible temperature. At absolute zero there is an absence of thermal temperature and molecular energy is minimal. The size of a degree in Kelvin is the same as in Celsius. Kelvin’s absolute zero is equivalent to -273.15oC; water freezes at 273.15K and boils at 373.15K.

No matter how the temperature is measured, I’m hoping for a beautiful and snowy winter with temperatures between 259K and 32oF. This should be optimal for snow fall and maintaining a snowpack. It also won’t be too cold for me to want to spend a lot of time outdoors. Whatever happens, I hope we don’t see too many days above 4oC because the snow might start to get slushy and melt.

Lara Carlson is the Senior Program Director at Walking Mountains Science Center. She uses temperature measurements to help her to predict how many layers of clothes are needed for her winter outdoor adventures.

Lara Carlson is the Community Programs Director at Walking Mountains Science Center. She can often be seen romping around through deep piles of snow with her dog, Mia. Lara and Mia volunteer with the Eagle Valley Humane Society’s free basic dog training class, join them Tuesday nights at the Eagle Fairgrounds.