Driving into the Past: The Geologic Formations at Wilmore Lake 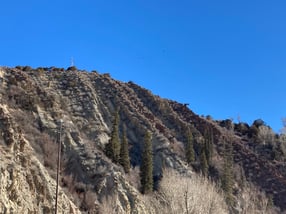 Chances are you have driven past Wilmore Lake in Edwards a time or two. Some of you may even drive past this destination every single day. But how many of us have stopped to experience the “scenic area” that the sign boasts at Exit 160 on westbound Interstate 70?

Contrary to what most of us assume, Wilmore Lake is a natural feature, not a casualty of I-70 construction and the necessity for a road pull out. The lake is fed by a natural spring and is home to many fish species including lake trout, brown trout, and largemouth bass.

The rock outcroppings above Wilmore Lake are where things really start to get interesting.

The Wilmore Lake rock outcroppings were formed 925 - 570 million years ago during a time that geologists call the late Precambrian Era. They were deposited as flat layers of sand, mud, and broken down bits of other rocks that were left behind by wind and water. These general types of rocks are called sedimentary rocks. Included in these sedimentary layers are deposits of a type of type of rock called evaporite. Evaporite is formed when large bodies of water that are full of minerals (like gypsum and salt) evaporate.

570 million years ago during the Paleozoic era, unknown forces started forming a mountain range in roughly the same place as the present day Rocky Mountains and Uncompahgre Plateau. These mountains are known by geologists as the Ancestral Rocky Mountains. Erosion continually chipped away at the Ancestral Rockies until Colorado was relatively flat by the end of the Paleozoic era (245 million years ago), burying the precambrian deposits and evaporites under thousands of feet of broken down rocks, mud, and sand.

In the early Cenozoic Era (57 million years ago), an event called the Laramide Orogeny started forming the present day Rocky Mountains and the Uncompahgre Plateau. The Laramide Orogeny lasted 32 million years and was a period of squashing, stretching, wrinkling, erupting, twisting, uplifting, pushing, eroding, and depositing. These intense forces can cause layers of rock to fold and tilt just like the folds of a blanket. Upward tilts and folds are called anticlines and downward bends and folds are called synclines. 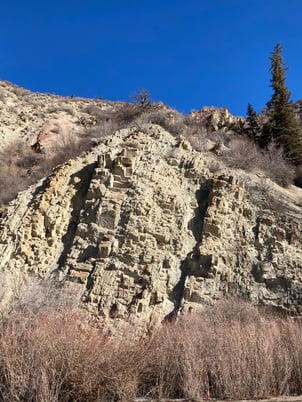 The deposits of precambrian sedimentary rocks in the present day Eagle Valley were no exception to these forces. The steady upward shoving of the Gore Range and Ten Mile Range resulted in the lateral compression of the precambrian sedimentary layers. With nowhere else to go, the layers of rock buckled and folded under pressure, causing a sharp (almost vertical) syncline. Through most of the Cenozoic Era, weathering and erosion carved out streams and river valleys, exposing the anticlines and synclines that make up the walls of the Eagle Valley.

So next time you are running a few minutes early for work, find yourself waiting for your child to finish soccer practice, or just can’t fight your curiosity any longer, exit off the interstate and take a moment to visit the little known natural wonder that is the rock formations by Wilmore Lake.

Carrie Anderson is the Environmental Leadership Coordinator at Walking Mountains Science Center. She is often seen exploring the wild places, trails, and ski runs in the White River National Forest and beyond.