Mysterious Creatures of the Dark 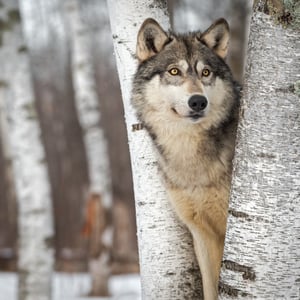 Despite the fact that few ever see one in the wild, Wolves evoke many different emotions in us. One of the largest land predators in North America, they have been used as symbols in famous stories for generations. From The Boy Who Cried Wolf to Little Red Riding Hood and The Three Little Pigs, these stories often portray wolves as scary and mysterious. In today’s Curious Nature, let’s take a look at the incredible physical adaptations that turned wolves into fearsome creatures of mystery.

Without ever seeing one in person, we can all imagine in our heads what a wolf looks like. However, it takes seeing one up close to truly grasp their size. Even though wolves are not the largest land predator in North America, in fact they don’t even make the top 3, they are still quite large. With a weight of 60-150 pounds and length from tail to nose of 5-7 feet they are a formidable predator. Their strength is compounded by hunting in packs, allowing them to take down prey far larger than themselves, such as deer, elk, moose, and bison. But wolves have many adaptations other than just their size and their pack hunting tactics that make them such a formidable predator. They tend to sleep during the day and are most active at dawn and dusk, a tendency referred to as being “crepuscular.” Their habits depend mostly on the habits of their prey, so they can adapt to nocturnal or diurnal tendencies as needed. In order to hunt at night, wolf eyes have adapted to see better in the dark. Many people believe that wolves and dogs are colorblind, but in fact they just have fewer color-sensing “cone” cells in their eyes, and more light-sensing “rods” than we do. They can see better at night than humans, but we can see more color and detail. While their eyes may not be objectively better than ours, their ears and noses are far superior. Similar to dogs, they can hear much higher pitch sounds than humans and can smell things that even man-made sensors cannot pick up. You have probably seen a sniffer dog for the police or airport security, and a wolf can use that keen sense of smell to find its prey or to tell if rival wolves or other predators are in the area.

Imagine you are sleeping under the stars on a peaceful moon-lit night when you hear the sound of a pack of wolves letting out a spine-tingling series of howls. Because they’re so elusive you probably didn’t see any sign of them during the day, but their howls send a scary reminder that they are out there. So why do they howl? Is it to scare you, or just to communicate with their friends? It’s probably a bit of both! Wolves howl to communicate, but like marking their territory with urine, they will also howl to alert others to their presence. This helps to reduce the number of aggressive encounters. Who would have thought that wolves will sometimes talk things out rather than fight?

The Grey Wolf once roamed North America from the east coast to west coast, and from Canada down to Mexico. Today their population remains strong only in Canada, Alaska, and some of the far northern areas of the United States. But their population is rebounding, and with that rebounding population come many of the fears that have surrounded wolves for generations. They require large areas to roam—areas that people often now call home. In order to reduce the risk to both humans and wolves, it is important that we understand these creatures as more than just the stories that stigmatize them.

To learn more about wolves and to see live cams of wolves check out the International Wolf Center in Ely, Minnesota online at wolf.org