Spring in the Rockies 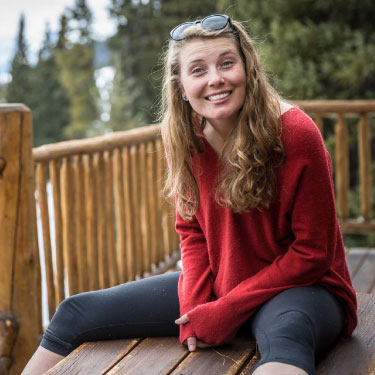 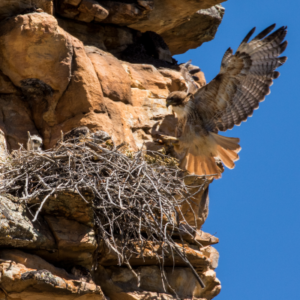 Even though the Red-tailed Hawk is the most common hawk in North America and is a year-round resident of the Eagle Valley, spring doesn’t feel complete until the neighboring pair of Red-tails have moved back into their nest.  You know it’s that time of year when you spot their broad, rounded wings soaring and circling above the massive Blue Spruce they’ve claimed as home for the last handful of years.

The days grow longer and warmer, and the cinnamon-red pair let out their thrilling, raspy screams as they put on a courting display for all to enjoy.  Mated for life, the pair of Red-tailed Hawks begins their courtship by soaring in wide circles at a great height. We watch as the male dives steeply, then shoots up again at an angle nearly as steep. After several of these swoops, he approaches the female from above, extends his legs, and touches her briefly. Suddenly, the pair grab onto one and other, clasp talons, and plummet in spirals toward the ground before pulling away as the last possible second.  Now it must be spring.

Instead of starting from scratch, the pair aggressively defends last year’s nest from Great Horned Owls, eagles, and other hawks.  Over the next week, we watch through the spotting scope as they refurbish their prized nest, adding dry sticks and other vegetation until it piles up to six feet high and three feet across.  They scour the open fields and hillsides for ground squirrels and chipmunks, newly emerged from hibernation.  Working together to hunt, they attack in a slow, controlled dive with legs outstretched, their powerful talons clutching and never letting go.  The female is working hard to support her three-pound physique in preparation for the eggs to come.

At this point the snow is melting, Buck Creek is audible from a distance, and other migratory birds like the Broad-Tailed Hummingbird and the song sparrow are singing their presence.  Mallard ducks dabble in the pond while the willows and aspens send their catkins out into the fresh, crisp air.  The Pasque flowers and spring beauties pop their lovely heads up to greet the spring day.  And all the while, the Red-tailed Hawks sit and wait patiently on the nest.  For the next month, while the mourning cloak butterflies soar and the marmots sun themselves, the hawks will incubate their clutch of eggs.

Morning, noon, and night, the pair share incubation duties until one day, a tiny, blind, and helpless chick pips its way into the world.  One at a time, the clutch will break through their shells, using a hard projection on their bill called the egg tooth. The resulting hole is the “pip” that the chick then enlarges to finish hatching.  For a month and a half, mom and dad will tirelessly hunt for small mammals to feed their rapidly growing brood.  The chicks will inhale every scrap they are given until their awkward, fuzzy bodies are spilling from the edges of the nest.  This is when we will say goodbye to the fledglings as they test their sturdy wings and say hello to summer in the high country.

From my perch, I know it’s spring.

Kaitlyn Merriman is the Community Program Coordinator at Walking Mountains Science Center.  She loves to explore in the springtime, especially up high where the skiing is still good.