Catch me outside, how about that?

A flash of gray moving from tree to tree and twinkling, beady eyes that follow your every movement; this is a common encounter with the Canada Jay. As a round-year resident of the mountains, this bird has to overcome the cold of winter with various tactics. Before diving into its strategy plans, let’s cover how the common name of the plucky Perisoreus canadensis has undergone change in the past century. Known as the Canada Jay from around 1831 until 1957 when the bird’s common name was changed to Gray Jay by the organization now called the American Ornithological Society. This was due to a change in the ornithological naming system where common names were given to both the full species and the subspecies and the subspecies had to be geographically relevant which resulted in names like the “Oregon Canada Jay”. However, the American Ornithological Society voted to change the common name back to Canada Jay in 2018.

When thinking of an animal taking that long nap during hibernation, most of us think of the mighty black bear. Shockingly, while bears are often the mascot of hibernation, they are not considered true hibernators. Bears enter a state called torpor, which differs from hibernation in that hibernation is an extended state of torpor. Torpor includes physiological changes like decreased body temperature, decreased metabolism, lowered heart rate and slower breathing. Hibernation is an extended state long-term dormancy. Bears are not truly in hibernation because they can wake up fully when conditions prompt them. Once awake, bears do tasks that require a higher metabolism like emerging from their lairs to consume more calories. If the poster-child for hibernation is not even a true hibernator, then who is?

The Canada Jay is also commonly referred to as “Whiskey Jack,” which is a variation on the Algonquin Wìsakedjàk or Cree Wihsakecahkw words that refer to an intelligent, shape shifting trickster in First Nation lore. This seems fitting for a bird that is also nicknamed “camp-robber” for fearlessly stealing food from campsites.

Canada Jays dwell all year in high mountain subalpine spruce and fir forests. During the winter when temperatures can drop to -20° F, it is important for Canada Jays to stay warm. One helpful adaptation is having thick and fluffy plumage that covers their legs and even their nostrils. Young Canada Jays, who are born in mid- to-late winter, are kept warm by their mother’s body heat and well-insulated nests made of twigs, lichens, strips of bark and a special component, caterpillar cocoons/webs. A lining of animal hair and feathers makes a cozy nest that protects the eggs and chicks from the harsh elements. Canada Jay chicks fledge from the nest before most of the migrating birds have even begun to build their nests. This early start gives chicks more time for their brains to develop, for the juveniles to learn how to store food, and for the adults to hide their own food in preparation for winter.

The Corvid Family includes ravens, crows, and jays all of whom are known for being cunning opportunists, taking advantage of their surroundings in creative ways. Canada Jays have a little surprise located in their mouths: special glands that produce sticky saliva. A mix of food and saliva forms something called a bolus, which with the sticky saliva can be glued in different nooks and crannies like beneath the flaky bark of spruces or under clumps of lichen. Caching food, or storing food in a safe place for later, is a common winter tactic among the Corvids. Specifically, Canada Jays hide up to 100,000 pieces of food in the summer and later in the winter recover almost their entire stash by memory with about an 80% retrieval rate! Being omnivores, Canada Jay’s cached items range from crumbs to berries to raw meat to mushrooms to bugs. A lot of these foods require below freezing temperatures for preservation, but as the climate changes, scientists are observing that Canada Jay food caches are spoiling more often, and thus lowering their chances of winter survival. 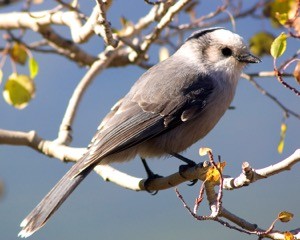 The Canada Jay has experienced change with its name and may have to adapt its winter tactics in the future with climate change. But for now, it is not endangered and if it is anything like the shape shifter Wìsakedjàk, it may have other tricks up its sleeves.

Christina Nourmiev is a Naturalist with Walking Mountains Science Center. Not much of a birder, but a Canada Jay is one of the birds that she can readily identify, maybe only because it has stolen food from her.