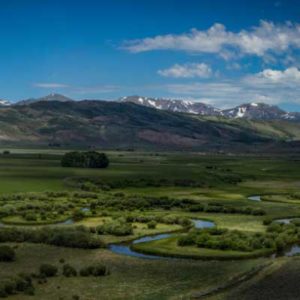 When I think about the 4th of July and all that it celebrates about our great country, I can’t help but think about our system of public lands, and in particular, wilderness. In the state of Colorado, we have more than 3.5 million acres of federally protected wilderness, located in 41 separate wilderness areas and managed by three different federal agencies, depending on where they are located.

The Wilderness Act was passed in 1964, making the United States the first country to designate and define wilderness by law, although many other countries have followed suit since then. Freedom is an essential aspect of wilderness, and one of the most famous parts of the Wilderness Act refers to this. Section 2(c) of the document defines wilderness as "...an area where the earth and its community of life are untrammeled by man...” But this clause is also one of the most often misquoted and misunderstood. Most people interpret the word “untrammeled’ as an old fashioned version of the word trampled, and assume that this is to be an area that should not be trampled or stepped on. But in fact, the word “untrammeled” was very deliberately chosen by the author of the wilderness act, Howard Zahniser. A trammel is a net used to catch fish or a device used to hobble a horse, or “a restriction or impediment to someone’s freedom of action.” Using this definition, a wilderness area is a place that is unconstrained by humans, and Zahniser went on to define “untrammeled” in the Wilderness Act as “not being subject to human controls and manipulations that hamper the free play of natural forces.”

On the website for the US Forest Service, they advise that, “Wilderness is a Challenge, Responsibility, and Reward!” This reminds us that we are fortunate as Americans to count wilderness lands as part of our birthright. These lands are the physical manifestation of the spirit that made America great long, long ago. When the early homesteaders ventured into the wilderness, it was regarded with fear and considered dangerous. But as time passed and cities grew, the value of these lands became evident to a few wise, brave souls with the foresight and fortitude to lead the battle for preservation.

Here in Eagle County, we have access to some of the most beautiful wilderness areas in the country (local bias evident). We can access the rugged Eagles Nest Wilderness, governed by the White River National Forest, through Piney Lake Road north of Vail, or via Gore Creek trail in East Vail, and hike over Red Buffalo Pass to end up in Summit County. The hikes in this area are generally steep, with the jagged peaks of the Gore Range above, and dense, thick forests below. For those looking for terrain that is slightly less steep, the Holy Cross Wilderness is a good option, with access through Homestake or Tigiwon Road, both turn south off of Hwy 24 between Minturn and Leadville.

The late, great, Ed Abbey always had something to say about wilderness, and he can say it better than I can, so I will leave you with his words. “A venturesome minority will always be eager to set off on their own, and no obstacles should be placed in their path; let them take risks, for godsake, let them get lost, sunburnt, stranded, drowned, eaten by bears, buried alive under avalanches - that is the right and privilege of any free American.”

Jaymee Squires is the Director of Graduate Programs at Walking Mountains Science Center in Avon and she is looking forward to enjoying her freedom in the wilderness this 4th of July.