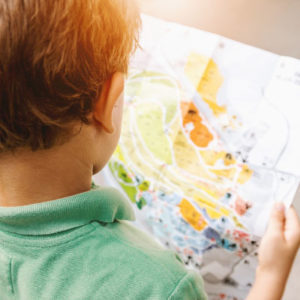 Last year, my young cousin visited me on his way driving from New York to Los Angeles. He explained that they would be driving to Salt Lake City after leaving my house. “Why Salt Lake City?” I asked. “Isn’t that taking you pretty far north?” “Well, that’s what Google Maps is telling us …” So I got out my old paper maps and it quickly became clear that they would be taking the long way to L.A.

When was the last time you unfolded an actual paper map and used it to find your way around? And if you have kids, have they ever even seen a paper map? When I was a kid, I used to love to follow along on the map when we were taking a trip. I would pour over the strange sounding names and wonder what those places and the people in them might be like.

If you haven’t taken out a map with your own kids, try it. Allow them to follow along on the route to Denver, or trace the contours on a topographic map of your next hike. It can open up a whole new world of possibilities and adventures.

Beyond looking at maps that are already made, you can challenge your kids to create their own maps. You can start small for the youngest kids, asking them to draw “pictures” of their house or bedroom that show where things are located. As kids get older, they might be able to draw larger maps of their neighborhood or the route to school, or even maps of places that they have visited. Kids can also create maps of their own adventures, or make treasure maps for friends! Drawing a map challenges our brains to think spatially, and you can just imagine some of the critical thinking and creativity that are essential for this kind of activity. Considerations about distances, directions, scale, proportion, and perspective are just a few that might figure into the art of map-making.

Beyond the practical and concrete skills involved in map-making, maps can really help kids to understand and explore the place in which they live. Maps are pictures of the land, and if kids have more ways to connect to the land, there is a better chance that they will grow up and want to take care of that land. So encourage your kids to embark on their own journey of adventure and discovery, and to map it out!