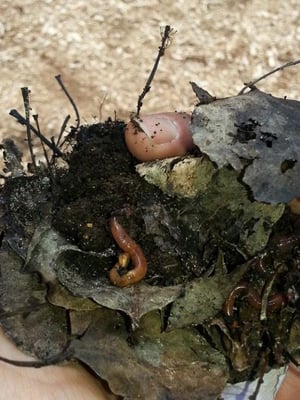 Walking Mountains Science Center recently held the Science Behind Worm Composting at our new campus in Avon, CO.  The class was such a success, we thought we share a few highlights and FAQs about worms and composting. Due to the popularity of this class, we will likely hold another sometime soon. Keep an eye on our online event calendar for upcoming community classes.

A worm bin is one of the best ways to start your foray into composting in small indoor spaces.  Worm castings provide a nutrient rich layer perfect for use as extra fertilizer.  The worm bins are relatively small and convenient for use inside your home.  This "do-it-yourself" project will take a bit of planning and a few hours of your time.  Check out our composting guides:

A Guide to Worm Composting

A Guide to Backyard Composting

Where to Buy Worms For Worm Composting

We buy red worms for our bins online at www.happydranch.com

Can they see?
No, worms don’t have eyes. However, they must have some kind of light sensor. They are very sensitive to bright light. They will try to hide as soon as exposed. It’s odd that anglers use a flashlight to catch night crawlers, since they retract in their burrows if you shine lights on them. Worms are less sensitive to red light. You can observe worms with red light. Placing red cellophane between the light source and the worm box allows you to watch the worms.

Where is the mouth?
The worm’s mouth is in the first anterior segment. There is a small protruding lip just over the mouth, called prostomium. When the worm is foraging, this lip is stretching out. The prostomium is for sensing food.

Do they have teeth?
Worms have no teeth for chewing food. They grind food in their gizzard by muscle action

How do they grind food?
Worms can only take small particles in their small mouths. Microorganisms soften the food before worms will eat it. Worms have a muscular gizzard. Small parts of food mixed with some grinding material such as sand, topsoil or limestone is ingested. The contractions from the muscles in the gizzard compress those particles against each other, mix it with fluid, and grind it to smaller pieces.

What happens to food once it leaves the gizzard?
The ground up food is mixed with enzymes in the worm’s intestine. This mixture breaks down the food, molecules pass through the intestine wall into the bloodstream for use where needed. Undigested material, including sand soil, bacterial and plant residues passes out of the worm as a worm casting.

Do worms die in the box?
It’s hard to find dead worms in a worm box, but they do die in the box. Dead worm bodies decompose very quickly, because their bodies are between 75%-90% water. If you find many dead worms you should find out the cause. High heat (above 84 degrees) is fatal to them. Too much salt or acidic food waste can kill them. It’s best to change the bedding with fresh materials to solve the problem. Sometimes, partially replacing bedding may solve the problem.

How long do worms live?
Often, worms live and die in the same year. They are exposed to hazards, dryness, too hot or too cold weather. Eisenia fetida (this species of red worm) can live for as long as four years.

Do worms need air?
Worms need oxygen to live. The oxygen diffuses across the moist tissue of their skin, from the region of greater concentration of oxygen (air) to that of lower concentration (inside the worm.) Carbon dioxide produced by the bodily processes of the worm also diffuses through skin. Moving from higher concentration to lesser concentration, carbon dioxide moves from the inside of the worm’s body out into the surrounding bedding. A constant supply of fresh air throughout the bedding helps this desirable exchange take place.

New to Walking Mountains Science Center?  Come check out our campus in Avon, CO or visit our events calendar online to find out when our next Science Behind class is being offered.