The Sustainable Film Series: STRAWS & Smog of the Sea 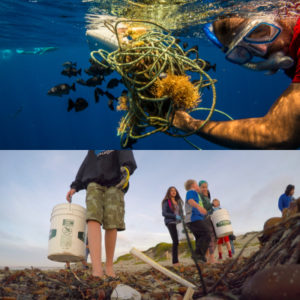 Ever since the industrial revolution, our country has been all about convenience, from fast food chains to grocery stores. The convenience may make our busy lives a lot easier, but do we ever stop to think about the consequences?

The Sustainable Film Series – a project of Walking Mountains Science Center – continues this month with an exclusive double feature focusing on plastic pollution – the result of our convenient lives. The short films, STRAWS & The Smog of the Sea, will screen twice. The first showing takes place at Loaded Joe’s in Avon on Tuesday at 6:30 p.m., and the second showing will be at the Dusty Boot in Eagle on March 19th at 6:30 p.m.

Over the past few months, straws have been the talk of the town. The short film, STRAWS, digs deeper into the history of single-use plastics and the harmful effects that they have on our environment and marine life. In the United States alone, it is estimated that 500,000 plastic straws are used each day and thrown away after one use. The Ocean Conservancy stated that plastic straws are among the top five items that are found on shorelines during beach cleanups. Take a minute to think about the convenient products you’ve thrown out in the past few days. A candy bar wrapper, a bag of chips, a straw?

Do we really want to continue making and using products that are used temporarily and end up in the ocean forever? Just as we depend on the mountains and vast forests for recreation and solitude, many populations around the world depend on the ocean for survival. Follow a group of scientists, surfers, and activists in the second short film, The Smog of the Sea, as they travel across the Pacific Ocean to collect data and predict how much plastic resides in our oceans. One of the many things that they discover is microscopic pieces of toxic plastic that fish are mistaking for dinner. Scientists have predicted that there will be more plastic than fish in the ocean by the year 2050. Let that sink in…

These films bring light to important issues within our society. As individuals, we have the power to prevent the further pollution of our oceans and lands so that our kids and grand kids can benefit from them, as we do now.

To view the entire line-up of the series, visit www.walkingmountains.org/films and for more information about these films, visit STRAWS & The Smog of the Sea.