Pay as you Throw Gets a Boost in Vail

Through a Recycling Resources Economic Opportunity (RREO) mini-grant from Colorado Department of Public Health and Environment the Town of Vail received twenty wildlife resistant, 32-gallon trash carts that Town of Vail residents were eligible for in order to reduce the amount of trash produced and take advantage of the financial savings through the “Pay As You Throw” ordinance.

“Pay as You Throw” financially incentivizes residents to produce less trash since rates are tied to the size of the trash can residents have at their home. Due to the cost of wildlife resistant trash carts, which are required by Town of Vail ordinance to protect wildlife, it is not feasible for some residents to purchase a smaller cart. In addition, it is very challenging to find 32-gallon wildlife resistant cans available for sale in the mountain region. Both factors contribute to the challenge of obtaining smaller trash carts and benefiting from the “Pay as You Throw” pricing structure. The goal for this project was to provide residents with tools and knowledge to increase waste diversion and build greater awareness of “Pay as You Throw.”

Residents filled out an application and carts were distributed on a first come, first serve basis. The Town of Vail provided participants with a recycling sticker they can use to repurpose their old trash cart into a larger recycling container. Otherwise, participants exchanged their old, large trash cart when they received their new, small trash cart. The exchanged carts are available to other town residents interested in obtaining a larger recycling cart free of charge. Some of the participating families also subscribed to the composting program offered through Honeywagon Organics to assist in their efforts to reduce the amount of landfill bound waste produced each week. 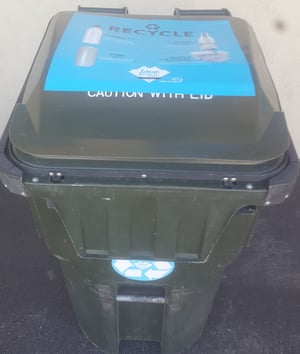 There was a strong response to the program and all of the carts were spoken for within the first three days of advertising the program. Given the number of interested residents, Town of Vail opted to purchase another twenty 32-gallon carts to satisfy the unmet demand. Once put into service, the additional twenty 32-gallon carts will have the capacity to reduce an additional 14 tons of municipal solid waste produced per year. This combined with the reduced tonnage from the initial twenty trash carts already in service could decrease the overall tonnage produced in the Town of Vail each year by a total of 0.28%. With the additional twenty rebranded recycling carts that will be created and put into service through the expanded exchange program, there will be an overall increase of 0.74% in recyclables collected per year by the Town of Vail. The Small Bin Exchange Program will help move the Town of Vail closer to achieving its goal of a 25% diversion rate by the end of 2019 and support the Climate Action Collaborative in its goal of a 30% overall diversion rate by 2030.

As awareness of “Pay as You Throw” builds and more 32-gallon trash carts are circulated in the community, these efforts will ideally serve as a catalyst for more residents to obtain smaller trash carts and produce less waste. The Town of Vail will continue to provide education and outreach to residents, businesses, and visitors on opportunities to recycle, reuse, repurpose, and compost while stressing the importance of waste diversion. Overall, the grant funded Small Cart Exchange program proved to be a success and the Town of Vail looks forward to seeing the results come to fruition.