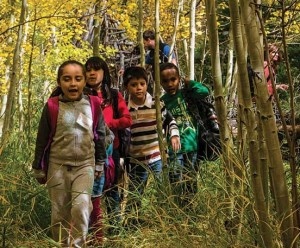 As a young adult I loved movies about high school. The exaggerated caricatures of the “jock” the “mean girl” and the “nerd” were just familiar enough to relate to the characters from my own school experience. Now looking at the labels that students adopt, I see that they are often limiting to those who wear them. As young as elementary school, students often understand the roles they can play in their peer group.

When students board the school bus for their field day at Walking Mountains Science Center, they carry not only their lunch and backpack, but also the baggage of their labels. These labels help children understand social structures, but when students learn that they can change their own social roles important moments of growth occur. There are special instances in which students break free of their role during their field science program, utilizing their day at Walking Mountains as an opportunity to reinvent themselves by connecting with nature.

One of this year’s educators, Matt Thomas, was a catalyst and witness to the transformation of a student who we will call “Jordan”. From the moment that Matt called his group of students into their first circle of the day he could tell by Jordan’s rude remarks and condescending tone that this student had assumed the role of “troublemaker”. While Jordan likely expected Matt to react in the way that most did to his behavior, with frustration or discipline, Matt chose to meet Jordan’s negative attitude with positivity and inclusion. At Matt’s request Jordan took on the role of “Line Leader” heading up his groups’ hike on the paths surrounding the Science Center in Avon.

He adopted the hat of “Water Monitor” making sure that all students stayed hydrated by chanting “YO YO YO” to which his peers responded “H2O”, followed closely by all students taking a sip from their water bottles. And somewhere on those trails amidst the trees and surrounding nature, Jordan traded in the tired role of a “troublemaker” for that of “leader”. By the end of the day, he had transformed into a smiling inquisitive member of the team, praised for his contributions to the group.

While recounting the day, Matt summed up the nature of education’s transformative powers perfectly:

“Our goal is to use nature as a catalyst to awaken a sense of wonder and introduce kids to a new way of learning outside the classroom. When I get to see an immediate change in a student, it’s a magical experience that I won’t soon forget.”

All the Educators at Walking Mountains have similar experiences. There is no exact formula that creates this change and inspires students to embrace their best selves during their day at Walking Mountains Science Center. I suspect it lies somewhere in the combination of an inspiring educator, a hands-on learning environment, and the wonder of the natural world.

Walking Mountains’ School Field Science Programs served over 3,600 students last year and are made possible thanks to the generous support of the Borgen Family Foundation, Sidney E. Frank Foundation, Vail Resorts Epic Promise, Town of Avon, Town of Minturn, and Town of Gypsum.