As the year comes to an end, all of us at the Climate Action Collaborative are grateful for the significant steps taken in 2022 to reduce greenhouse gas emissions at the local, state, and federal levels.

Here in Eagle County, 2022 was kicked off with the launch of the Adam Palmer Sustainability Fund in March. The fund, created to honor Adam Palmer, distributes funding to support the Town of Eagle’s climate action goals. In April, the Fund partnered with Holy Cross Energy, PowerField Energy, Eagle County, Walking Mountains Science 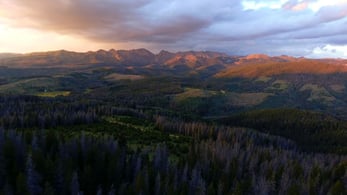 Center, and over 80 volunteers to construct a 200 kW community solar array in Gypsum that will provide renewable electricity to income-qualified community members.

Local climate action really heated up over the summer. In June, the Town of Eagle launched a curbside compost pilot program in partnership with Vail Honeywagon aimed at diverting organic material from the landfill. Along with the compost pilot, the Town of Eagle is ramping up climate action efforts to meet their goal of net-zero carbon emissions by 2030.

In July, the Town of Vail began enforcing the 2021 International Energy Conservation Code (IECC) for all new buildings. Commercial buildings built to the 2021 IECC will use 12.1% less energy and emit 10.2% less greenhouse gasses compared to buildings built to the 2018 IECC that the Town was using. Right now, the Climate Action Collaborative is assisting other communities in Eagle County with updating to the 2021 IECC, so that we can consistently build energy efficient buildings across the County.

In September, the Town of Avon passed a universal recycling ordinance that requires residents, businesses, and visitors to recycle starting November 1, 2023. Finally, just a few days ago, Eagle County voters approved the creation of the Eagle Valley Regional Transportation Authority, a huge win for public transportation, local businesses, and the climate!

At the State level, there have been numerous bills passed and agreements reached that will further climate action in Colorado. In April, the Pueblo County Commissioners reached an agreement with Xcel Energy to retire the Comanche 3 coal-fired power plant nine years earlier than originally planned. This will end the burning of coal for electricity in Colorado.

Additionally, June 2nd was a monumental day for climate action in Colorado. Three bills were signed into law that will directly reduce greenhouse gas emissions in the State. The first, SB22-193: Air Quality Improvement Investments provides $65 million for electric school buses, $25 million in clean air grants, and $12 million for e-bikes. HB22-1362: Building Greenhouse Gas Emissions will require communities to update energy codes to the 2021 IECC when they update any building code. Finally, HB22-1355: Producer Responsibility Program For Recycling, will require “the product or package producer to be responsible for…[the] package at the end of its useful life,” according to Waste360.

At the federal level, 2022 marked the passage of the Inflation Reduction Act (IRA), the “most significant legislation in U.S. history to tackle the climate crisis.” The IRA authorizes the Federal Government to spend billions on energy security, climate change, and drought resilience. The Act will reduce national carbon emissions by 40% by incentivizing countless energy efficiency and electrification improvements.

As 2022 draws to a close, I am grateful for the hard work of many in Eagle County, in Colorado, and across the country to reduce carbon emissions. I know that we will continue to reduce emissions even more in 2023 and beyond!